“Worldwide icon of melodic rock Stan Bush is best known for his song “The Touch,” made famous by Transformers: The Movie (1986). An anthem for Transformers fans around the world, “The Touch” was remixed in 2013 by High Moon Studios for their hit video game Transformers: Fall of Cybertron. It has also been featured on ABC’s The Goldbergs, NBC’s Chuck, FOX’s American Dad, in RBN’s Guitar Hero, Deep Silver’s Saints Row IV and in the motion picture Boogie Nights. In 2014, Stan was inducted into the Transformers Hall of Fame.”

Visit stanbush.com to check out great merch and autographs! Also if you are located in the Florida area, Stan will be attending Hero Convention in Fort Myers during the weekend of November 18-20!

I Guess One Man Really Can Make a Difference

Those of you who know me, truly know me, know that mychildhood was quite difficult to say the least. My therapist and I are currently working on my displaced attachment issues and late developing connections to people. Because of that childhood and these issues, my formative  years have been skewed a bit from you ‘normal’ humans.

I had almost no positive male role models in my life. I was surrounded by evil men who did evil things with only a 5-foot-tall,  mostly lonely and depressed single mother as a shield. She did what she thought was her best, and I thank her for that and will always know the true meaning of courage as I saw her take on the role of the human shield to protect her children. But as a result of a brutal mixture of all of the above, there was a Thanos-snapping-half-of-all-existence-away sized void in my life.

Comic books were my savior (and KISS to be honest, but that’s for another rant). I learned how to be a man from Batman, Spider-Man,the Hulk AND Bruce Banner, Wolverine, Nightcrawler, Colossus, Daredevil, Mike Grell’s Green Arrow. I also learned that evil often hid behind masks (thank you Scooby Doo), but I saw the epic struggle between good and evil, between human nature and human spirit, and I chose Good Human Spirit. I may be more of the Wolvie anti-hero type, but I know true evil when I see it and I will always fight against it, regardless of how it is made to look by others (see 1980’s Green Arrow to fully understand, thank you again, Mike Grell).  As I grew older, Black Panther and Black Lightning taught me about true injustice in the system of perpetual racism, government greed and the people who directly or indirectly perpetuate it by ‘just doing their jobs.’  I learned what true intense depth of real internal/ external true love was from The Crow.  Unfortunately the movie never captured that very important aspect of the story.

I did not learn that from a father, or an uncle or grandfather or father figure at all (to be fair I never truly knew my grandfather until it was much later; had I truly known him growing up, no other hero could have possibly compared, but again, that’s for another rant).  I did not even learn that from a man who essentially became my god-father because he chose to reach out to a young man eating bologna by himself for Christmas dinner. Don Howard taught me what true kindness and family are.

I learned how to reach for the best human spirit has to offer mostly from what Stan Lee created. Stan Lee and his legacy is my father figure (in my teen years Mike Grell took that role over).  Not Stan Lee’s creations…no, this is much much bigger than that.  Stan Lee (with a beautiful nudge by his amazing wife) set out to create something different, something special.  Much like the best science fiction writers, he took the fantastic to a place that made us take a good hard look at our humanity and what we should be, what we’re doing compared to where we should be.  Since then, the entire genre of comic books was launched into the realm of the iconic.  Mythic heroes, angels, gods, superheroes…not just pretty stories for children to love, but these are life’s lessons that we should all be paying far more close attention to, especially considering our modern world.  So those I have mentioned not named or directly created by Stan Lee are included in this legacy, whether DC & other comic companies want to admit it or not.

In fact, at this very moment, hearing and responding to the news, I am watching Captain America: Winter Soldier. Why? Because I have been suffering some bitter crippling depression of late and can barely get out of bed. To help me through it, I have been watching all the Batman, Spider-Man, X-Men & Avengers movies, in order. My students and my ASL education can thank Stan Lee’s legacy for my continued participation in life.

I have only ever cried for the passing of a celebrity once before, and that was Jim Henson, maybe not a father figure, but the man who brought magic & manners into my life. I love you like a father, Stan Lee! And I will miss your cameos more than I probably should. I thank you for my moral compass and my childhood, Stan Lee. Without you I may not have had either. Excelsior!! 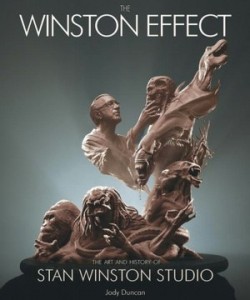 Stan Winston has created some of the most amazing monsters/creatures in films for over the last 30 years. Some of Stan’s work that he is known best for is ranges from The Terminator to Aliens and Predator to the amazing dinosaurs of Jurassic Park. It is just amazing to see some of the detailed process of his work and his team on these films. The copy up for review here is limited edition featuring a variant cover and signed by Stan Winston! So if you are able to pick one of these gems before they are all gone.

In a collaborated with Stan Winston Studio this book is the first-ever to reveal all the behind-the-scenes secrets Stan Winston’s influential artistry and effects work. It features some really detailed sketches, production art, and photographs. The book is split into the years of Winston’s work. “From Emmy to Oscar Nominations” covers 1972-1981 featuring the early work of Stan Winston like “The Wiz” and “Star Wars Holiday Special”. “Something Robotic This Way Comes” ranges from 1982-1984 and features some of his classic work like “The Thing” and “The Terminator”. “Aliens, Predators and Terminators” covers 1985-1991 and what it covers is obvious. This chapter is really the meat of his career and covers the most iconic creatures in his career. The next is called “And Stan Created Dinosaurs” from 1992-1999, “Jurassic Park” is such an important film in history mixing CG with practical effect. Lastly “It’s Not Just a Walk in the Park” covers from 2000-present, featuring “A.I.: Artificial Intelligence” to “Jurassic Park III”. It also takes us inside the studio, including a great foldout creature diorama. Lastly we have “Looking into the Future”, which talks about the future of Winston Studio (obviously prior to Stan passing away in 2008).

The photos is this book are extremely high quality. I found myself just starring at certain photos and admiring the scope of his work and the effects that it has had on film and myself as a film fan. This is probably one the best art of book that I have ever read. It is just such a great insight into the life and history that Stan Winston has left and of course it is great to showcase of the amazing creatures that he has left us with over the year. This book is honestly should be owned by every fan of movies…in general.