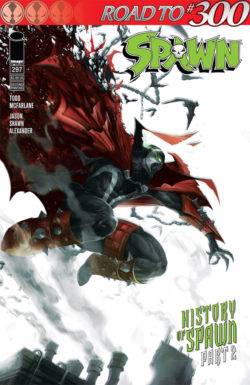 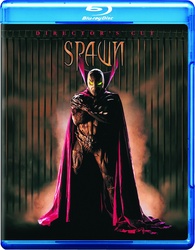 I have always been a huge “Spawn” fan, even owning an original #1 comic. I always had a special place for this film in my heart even though it has a lot of flaws and some really terrible visual effects. As much as I love “Spawn”, I would have to really recommend this only to the biggest fans of the character. The film is fun but has not aged well at all. I would love to hopefully one day see McFarlane make a sequel/reboot that is a lot darker like the comic. Warner’s Blu-ray release is really a great upgrade from the last DVD release. The 1080p transfer is sharp and clear, especially since most of the film is very dark. The DTS-HD Master Audio 5.1 audio track is also very impressive and sounds great with the film’s action. Nonetheless Warner’s delivers a great Blu-ray presentation and that is worth the purchase alone, especially for its low cost.

The special features included are nothing new for Blu-ray but still impressive. There is an audio commentary from Creator Todd McFarlane, director Mark A.Z. Dippe, producer Clint Goldman and visual effects supervisor Steve “Spaz” Williams. It is decent McFarlane’s track should have been included on its own track. There is a very extensive six-part behind-the-scenes looks into the production, running over 70 minutes. Including a 22-minute documentary called “Making of Spawn”, seven featurettes titled “Todd McFarlane: Chapter and Verse”, five “Scene to Storyboard Comparisons” and more. I’ve always loved this film’s soundtrack, included two music videos for “Trip Like I Do” with Filter & The Crystal Method and “Long Hard Road Out of Hell” with Marilyn Manson & the Sneaker Pimps. Lastly there is a Theatrical Trailer included.

Premise: A government assassin is brought back to life as a black superhero with supernatural How can you avenge betrayal and murder? How can you fight for right in a world so steeped in evil? How can you protect those you love most from all that can do them harm? No man living – or dead – can tell you. But one trapped between both is struggling for an answer that can save the lives of his most beloved, or plunge the world into eternal darkness. The cloak and chains of Spawn explode onto the screen in a deadly tornado of untapped, unwrapped, merciless power. 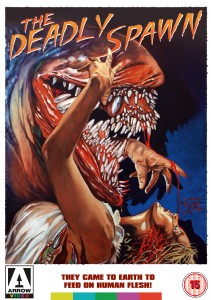 There is just something so perfect about a film with a tagline of “They Crawl, They Breed, THEY EAT!” They don’t make film’s like this anymore today. This latest Arrow Video release includes a digitally remastered window-boxed transfer in the original full frame aspect ratio. This film has held up over the years and still entertains very much. It is just refreshing to see actual creature effects, it is something the 80’s excelled in, since today everything is CG. This release also includes a reversible sleeve with original and newly commissioned artwork by Rick Melton. It also comes packed with a double-sided fold-out artwork poster. There is a collector’s booklet featuring new text from Calum Waddell and Tim Sullivan. “The Deadly Spawn” is a fun classic horror film that only gets better with each viewing.

After a meteor crashes into Earth, a small, American town becomes under siege with “THE DEADLY SPAWN, carnivores from outer space, who multiply and feast on the locals. It is up to a group of kids who stand up to these invaders and attempt to save the town and the world before it is completely overwhelmed. The film features some amazing visual effects from John Dods. Like I said, you just don’t get creature effects like this today. God Bless the 80’s and Arrow Video for releasing this gem!

The special features are very impressive. There is new an interview featuring “2001 Maniacs” director Tim Sullivan and Special Effects Director John Dods. If you are a fan of audio commentaries, this one has two, with writer and producer Ted A. Bohus and editor Marc Harwood. There is a comic-style prequel with its own musical score. There is an alternate opening sequence with new effects and credits. The extra “In the Workshop of S/FX Director John Dods” focuses on creating the film’s visual effects. There is a selection of archive TV interviews featuring the filmmakers. There are photo gallery featuring behind-the-scenes images, pages from the script, artwork and more. Since the film does have some aspect of comedy, there is a fun outtake reel. Lastly there is Audition Tapes and an original Theatrical Trailer included.