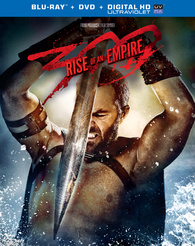 When I heard about the plans for a sequel to “300”, I have to admit, I did roll my eyes a little. Honestly though, “300: Rise of the Empire” is a actually a really solid follow up to “300” and in same way even a better film than the first film. It is adapted from a screenplay by Zack Snyder and Kurt Johnstad, and based on Frank Miller’s graphic novel “Xerxes”. It has a great cast lead by the gorgeous Eva Green (“Dark Shadows”) along with Lena Headey (“Game of Thrones”) and Rodrigo Santoro (“Love Actually”) who return to reprise their roles. After watching this I was left just saying “Wow, that was crazy”. Highly recommend.

Official Premise: “300: Rise of an Empire” takes the action to a fresh battlefield — the sea — as Greek general Themistokles (Stapleton) attempts to unite all of Greece by leading the charge that will change the course of the war. Themistokles must face the massive invading Persian forces led by mortal-turned-god Xerxes (Santoro) and Artemisia (Green), vengeful commander of the Persian navy.

Warner Bros is releasing the film as a combo pack with a Blu-ray, DVD and an Ultraviolet Digital Copy. This film was made to be seen in 3D and I am sure it is amazing in 3D but the film also worked very well in 2D. The 1080p transfer is easily one of the best that I have seen all year. It is flawless and really pops off the screen and that is not in 3D. I just love the style and this is just visually stunning. The DTS-HD Master Audio 7.1 surround track is literally insane and such a powerhouse! It had my walls shaking and my wife screaming to lower it, so that means it was very effective!

In terms of special features, there are some decent extras here. The main powerhouse here is “The 300 Effect”, which consists of four featurettes focusing on the film including “Brutal Artistry”, “A New Breed of Hero”, “Taking the Battle to the Sea”, which focus on taking the fighting to the sea and 3 Days in Hell” looks into the how the battle scenes were created. “Real Leaders & Legends” and “Women Warriors” shows us some of history legends that changed history. “Savage Warships” gives us an inside look into their creation. Lastly “Becoming a Warrior” looks into the challenge that was required to get ready for shooting. 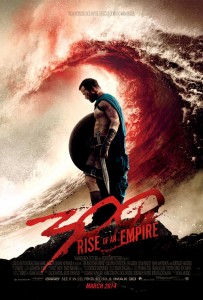 If you haven’t seen “300”, then don’t bother seeing this; you’re going to be confused. “300: Rise of an Empire” takes place before, during and after the movie “300”. It wraps itself around its predecessor like a cocoon and heavily relies on the viewer having previous knowledge of it. That’s not to say there isn’t a story here. The movie starts off with the Battle of Marathon, detailing the heroics of Themistocles (Stapleton), as he repels the first invasion by Persia and slays Darius, the father of Xerxes (Rodrigo Santoro). That segues into Xerxes’ path towards vengeance that will eventually lead to the second invasion of Greece nearly a decade later. He slowly deludes himself into believing he is a God among men. You can thank his right hand woman, Artemisia (Green), for polluting his mind with such a silly notion. Artemisia is Greek by blood, but wills the Persian army to avenge the wrongs made against her. We then see the duo’s carefully laid out land and sea invasions. Since we already the land invasion ends with King Leonidas and 300 Spartans biting the dust, we follow Artemisia as she commands a fleet into two sea battles. Themistocles and Artemisia lead their respective sides into battle, both seemingly invincible when participating in the melee.

I would probably be scolded for this sentiment, but I enjoyed this one more than the first. Where the first one took itself way too seriously and forcibly jammed the idea of freedom into it’s story, this one appears to realize how absurd it’s premise already is and just settles into violent popcorn entertainment. The extreme nationalistic pride is still there, but not persistently regurgitated in conversation. The movie instead propels the war forward as a personal vendetta by Xerxes and Artemisia. With that said, this movie would have crumbled without Eva Green playing a fantastic femme fatale. She owns the role of Artemisia in every way possible, clothing or not. I suspect Green has wanted to be the bad guy in movies for a while because she outshines the 10 foot tall Xerxes and is nothing short of malicious.

Zack Snyder seemed to tag along instead of sit in the director’s chair for this movie. He found Noam Murro to pilot this sequel and I’m not sure why he selected Murro. His only other directorial job was “Smart People”, where he had Dennis Quaid rediscover love and happiness with Sarah Jessica Parker. Maybe I’m wrong in my assumption. Maybe there’s a scene in “Smart People” that hinted at the director’s insatiable appetite to film disembowelment and decapitations of Persian underlings. Regardless, he seems to have filled Zack’s directorial shoes. If you had told me Zack directed this, I would have believed you.

Sure, I could go over the historical inaccuracies that tally higher than the corpse count, but that would be pointless. This movie’s purpose isn’t to be a glimpse into Greek history, but instead just a silly bloodbath. It’s more of the same, but it’s also a re-establishing of the brand Snyder put out way back in 2007. It’s simple minded violence that’s visually exciting and a true thrill to watch play out as it challenges itself to become more ludicrous with it’s psychotic clashes. “Rise of an Empire” manages to do what the Greeks did so famously with their own myths. It takes the history and culture and bloats it to make the heroes appear unbeatable and the enemies hopelessly evil. It then weaves it in an entertaining fashion.