“We are excited to collaborate for the fifth time with the legendary Nicolas Cage,” said Ward. “Following the success of Mandy, we cannot wait to take audiences on another adventure.”

In A SCORE TO SETTLE, Frank (Cage), a former mob enforcer, is released from prison after serving 22 years for a crime he didn’t commit. Now free, he sets out on a path for revenge against the people who wronged him.

Fraser commented: “After our experience collaborating on Terminal, we are delighted to be partnering again with Mark and the team at RLJE Films. A SCORE TO SETTLE has found its perfect home and we can’t wait for audiences to experience this action-packed ride come summer!”

“It has never been more difficult to produce a truly independent film,” says Producer Kevin DeWalt of Minds Eye Entertainment. “We are delighted to have amassed such an outstanding cast for A SCORE TO SETTLE and to be working with great distribution partners such as the Highland Film Group and RLJE Films.” 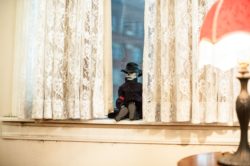