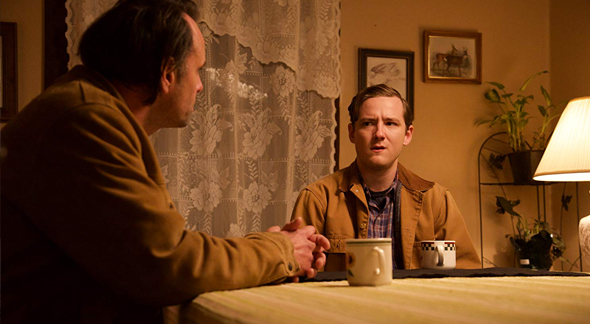 If you are anything like Indiana Jones, then the Appalachian-set drama “Them That Follow” will at the very least make you squirm in your seat. The feature film directorial debut by co-directors/writers Britt Poulton and Dan Madison Savage, “Them That Follow” is an interesting yet not too in-depth look into a branch of the Pentecostal faith that believes handling venomous snakes will prove their devotion to God. With a pace that flows like the mountain streams in the film, this relatively short drama contains a standout supporting performance by Academy Award-winning actress Olivia Coleman, but nothing else much is all that memorable.

A teenage boy named Augie (Thomas Mann, “Me and Earl and the Dying Girl”) is led into the woods by the girl of his affections, Mara Childs (Alice Englert, “Beautiful Creatures”), to a den of poisonous rattle snakes. It is perhaps not the greatest way to spend a date, but it quickly gives us an idea of what the people of an isolated mountain community are like. Snakes or no snakes, troubled times are brewing when we watch Mara steal a pregnancy test from a local convenience store run by Augie’s sour mother, Hope (Coleman).

This leads into a brief depiction of a church service led by old school pastor, Lemuel Childs (Walton Goggins, “The Hateful Eight”), Mara’s father. Lemuel inspires his small, yet devoted congregation to uplift their arms and wail as he dances about with a rattlesnake in his hands preaching that serpents will not hurt them if they truly believe in God. It all serves to heighten the pressure that Mara feels as she prays for the stain on her soul to be removed thanks to her test turning positive. And while Augie may be the baby’s father, she is squeezed in a vice when she is pressured to marry Garret (Lewis Pullman, “Bad Times at the El Royale”), another local boy infatuated with her but with a seemingly stronger devotion to her father’s church.

A pregnancy is obviously a difficult thing to hide for long and as such the stakes are raised when Hope discovers her secret as well as her blabber-mouth-of-a-best-friend, Dilly Picket (Kaitlyn Dever, “Booksmart”). The film falters with this storyline to be as tense as it could have been. It feels more like an after-school special on TV with the snakes being more dramatic than most of the actors. Goggins starts off well enough with his performance but his character is soon revealed as merely one dimensional. What could have energized the entire film, and is only barely alluded to, is the cultural struggle between the Pentecosts and the outsiders, especially law enforcement who seems to hound them.

Colman, fresh off her win for “The Favourite,” is a shining light as she burns up the screen each moment she is in a scene. Her performance ranges from stoic to deeply emotional. Every actor around her is overshadowed by her presence, which is not hard to do as the rest of the cast delivers mundane performances. Overall, “Them That Follow” is predictable fair with nothing to keep our memory of watching it alive for too long.