Director Quentin Tarantino recently revealed his “Top 10 films of 2013 so far” with fan site The Quentin Tarantino Archives and some might be surprised by his taste in movies. Although many of his releases include highly (and deliberately superficial) violent sequences with sometimes unconventional story lines, his list illustrates that he appreciates movies of various genres. I guess it isn’t a surprise then that Woody Allen’s celebrated film Blue Jasmine is featured. More surprising however, is his choice to add Disney’s flop blockbuster The Lone Ranger featuring Johnny Depp. Below is the complete list of Tarantino’s Top 10:

As the rankings are in alphabetical order and not order of preference, it is hard to determine which film has made the ultimate #1 spot. Nonetheless, his selection will have an impact on film buffs and Tarantino fans all over the world. There are only a number of other directors like Tarantino that have influenced the cult and pop culture film scene like he has, with masterpieces like Pulp Fiction or his latest, Django Unchained. Iconic images and movie posters to his classics can be spotted at myriad retailers from online stores like posterlounge.co.uk to local video stores.

Quentin Tarantino’s next project still has not been confirmed but with public appearances at the Huading Awards in Macau, there may be a chance that he reveals something in a few days. A third part of Kill Bill is possible or a spin-off mix of Inglorious Bastards and Django. Sounds unfathomable, as have many of his story lines, so maybe it’s wise not to write off this rumor just yet. 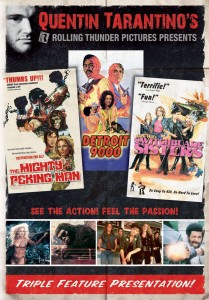 When Tarantino and Miramax started Rolling Thunder Pictures back in 1995, it was a label that was meant to release lost gems and fan favorites that haven’t seen the light of day in a long time, generally cult classics. This triple feature DVD release showcases Tarantino favorites from the label including “Detroit 9000 (1973)”, “The Mighty Peking Man (1977)” and “Switchblade Sisters (1975)”. These films are classic exploitation flicks and should be a must see for all fans of that genre. I really had a blast revisiting these titles and I am sure you will too, whether you are watching for the fifth time or the very first time!!

Like Tarantino himself, one of my first jobs was working at a mom and pop video store. It was one of my favorite jobs that I have ever had and I even met my wife working there. I remember when these films were re-released on VHS, that’s right VHS, under this label. I was responsible for ordering at the video store and I was sure to stock up on these three titles when they were re-released back then. This DVD is a nice way to own these three cult classics again and you really can’t describe it better than it is on the box “See the Action! Feel the Passion!” No-brainer for any fan of exploitation films.

“The Mighty Peking Man” Official Premise: Treat yourself to one of the funniest and campiest movies ever made: The Mighty Peking Man! After a colossal ape-like creature is captured in the jungle and brought to civilization – along with the scantily clad blonde bombshell he protects – the fearsome beast breaks loose and goes looking for giant-size payback!

“Switchblade Sisters” Official Premise: A riotously entertaining mix of sex, jealousy and massive ﬁrepower, Jack Hill’s Switchblade Sisters is the action-packed story of the toughest gang of teenage girls to ever hit the streets – the Dagger Debs. Bad to the bone, these outrageous high school vixens go where they want…and create mayhem wherever they go!

I have been a Quentin Tarantino fan film since day one.  His films also come with the most interesting music and his soundtracks never let down.  “Django Unchained” is definitely no different. It comes packed with a wide-variety of music and seven tracks of specific dialogue from the film.  I used to love the “Pulp Fiction” soundtrack for that same reason.  I love how the music is so perfectly chosen that it also helps describe the type of film that this is.  Since this has the ole’ spaghetti western-style feel, we get some of that feel and then completely on the other side there are rap songs. So there is a little bit for everyone here. And if you know Quentin Tarantino then you will not be disappointed by this soundtrack.

The star of this soundtrack besides Ennio Morricone’s beautiful score tracks is the brand new mash-up of James Brown and 2Pac on the track “Unchained (The Payback / Untouchable)”.  This song is so exciting and gets you completely pumped up.  Honestly, I think this track is worth the purchase of the soundtrack alone.  It is also perfectly placed, of course, after Elisa Toffoli’s very quiet “Ancora Qui”.  This is a like an explosion and it does let up for almost 3 minutes.  I would have loved for it to run more like 6-7 minutes, thank God for loop. Did I also mention that Samuel L. Jackson has some nice dialogue tracks, which takes me pack to 1995 with “Pulp Fiction”…”English motherfucker! Do you SPEAK IT!”.  You will literally want to run out and see this film immediately after listening to this soundtrack or if you’ve seen it, it is a perfect companion to chill out to after watching this film.