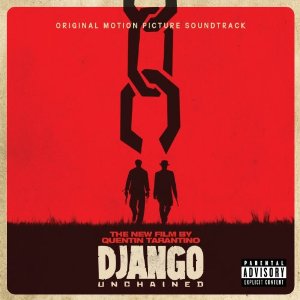 I have been a Quentin Tarantino fan film since day one.  His films also come with the most interesting music and his soundtracks never let down.  “Django Unchained” is definitely no different. It comes packed with a wide-variety of music and seven tracks of specific dialogue from the film.  I used to love the “Pulp Fiction” soundtrack for that same reason.  I love how the music is so perfectly chosen that it also helps describe the type of film that this is.  Since this has the ole’ spaghetti western-style feel, we get some of that feel and then completely on the other side there are rap songs. So there is a little bit for everyone here. And if you know Quentin Tarantino then you will not be disappointed by this soundtrack.

The star of this soundtrack besides Ennio Morricone’s beautiful score tracks is the brand new mash-up of James Brown and 2Pac on the track “Unchained (The Payback / Untouchable)”.  This song is so exciting and gets you completely pumped up.  Honestly, I think this track is worth the purchase of the soundtrack alone.  It is also perfectly placed, of course, after Elisa Toffoli’s very quiet “Ancora Qui”.  This is a like an explosion and it does let up for almost 3 minutes.  I would have loved for it to run more like 6-7 minutes, thank God for loop. Did I also mention that Samuel L. Jackson has some nice dialogue tracks, which takes me pack to 1995 with “Pulp Fiction”…”English motherfucker! Do you SPEAK IT!”.  You will literally want to run out and see this film immediately after listening to this soundtrack or if you’ve seen it, it is a perfect companion to chill out to after watching this film.