Ghost continues to thumb its nose at metal purists with their latest EP. If you’re hoping for a return to the heavy doom metal that was “Opus Eponymous” you’re going to continue to be severely disappointed in Ghost’s current direction. “Popestar” drops the same day as they begin their new North American tour. The EP may come as a reaction to the newfound attention the gimmicky Satanic band from Sweden got after nabbing a Grammy earlier this year for the single “Cirice”. An appearance on the Late Show with Stephen Colbert before Halloween doesn’t hurt either.

Unlike their last EP, “If You Have Ghost,” “Popestar” comes with a fresh song that’s a suitable follow-up to the mellow progressive rock/metal album “Meliora”. The new song, “Square Hammer,” blasts out of the gate with a cheesy horror organ tune with rock drumming underneath. Once the guitars kick in, there’s an infectious catchiness to all the instruments firing off seamlessly. At no point does “Square Hammer” feel like a chart topping metal song, but a catchy rock tune that could easily sneak into the Top 40 of any pop station. That is if it wasn’t for the allusions to Satan.

The chorus of “Square Hammer” is something that’ll have fans singing and chanting along like they’re at an arena rock concert. The hokeyness of the song, Blue Oyster Cult-like guitar solos, almost mask that this song is about fully submitting to the Dark Lord instead of passively giving the thumbs up to Satan. The band has even dropped a music video to accompany the song, featuring an homage to 1920’s Dracula and the inherent cheesiness that the band has been from day one. Asking listeners to give in to Satan has never been so poppy or catchy.

The EP then gives us a breather by sliding into the simplistic, but head bobbing “Nocturnal Me,” originally by Echo & the Bunnymen. The post punk guitars for this song are tuned heavier and make it a moodier. The post-punk music is an easy mold for Ghost to fit into. It’s a song that allows for atmospheric evil to permeate and eat up five minutes very quickly. I can see Trent Reznor hearing this song and kicking himself in the head for never covering it.

The oddest choice for this EP comes next on “I Believe,” originally by Simian Mobile Disco, which is like a contemporary Pet Shop Boys, but without the 80’s charm. “I Believe” may grow on me, but it only features heavy synthesizers, R&B guitar plucking and light drumming. It may serve as a brief segue between the two halves of this EP. The four minutes doesn’t go by fast enough, but on a solid play through of this EP, it feels more like an unnecessary break between the two halves of this EP.

The heaviest the band gets on this EP is covering a Eurythmics song on the next song. They take British pop band’s soul single, “Missionary Man” and crank the guitars and drums to 11. Vocalist Papa Emeritus III keeps the soul vocals intact and the band does their best to turn the blues riffs into breakdowns that melt in between the rhythmic metal chugs. Hearing Papa Emeritus III with a southern twang to his voice is enough to check out this song.

The EP ends on an oddly inspirational sounding track, “Bible” originally by Imperiet, a short-lived Swedish post-punk band that I’ve never heard of and you probably haven’t either. The gospel chorus, sweeping drums, toned down guitars, soft acoustic guitar, and heavenly organs are incredibly misleading. Once you get down to the lyrics of this sucker, you’ll realize how critical it is religion, power, government and humanity’s hypocrisy. It’s a beautiful song that’s haunting and deserves repeated listens with your volume knob all the way to the right on your speakers.

“Popestar” is another solid outing for the band. Ghost is known for “replacing” their lead singer with a new persona for every new album. This EP is certainly a farewell to Papa Emeritus III, which feels fitting with how much this EP feels like a crisp summarization of what made Ghost a hit on the American scene in the past year with the personification of Papa Emeritus III at the helm. Their fearless tackle of pop music with their traditional doom metal sound is highlighted on “Popestar” It’s a wonderful counterbalance between the stingy headbanger crowd and the passive metalhead who dabbles in other genres. The EP title is a reference to the criticisms by some that they musically “sold out” by going for a more mainstream sound, but also a statement that they’re going to continue to push metal into new boundaries with their newfound fame. 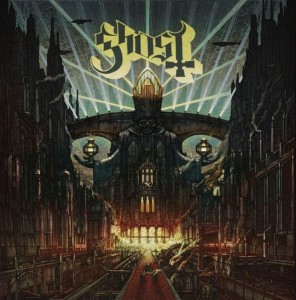 The latest offering from Ghost is certainly their most edgy release yet however the music still does little to live up to the bands dark imagery. With this being the first album to feature the newly anointed Papa Emeritus III signaling a new chapter for the band I had extremely high hopes. After hearing the album’s first single “Cirice” which features thunderous drums and a cool repeating guitar riff ala “Black Album” era Metallica I thought the band was off to a great start. Sadly much like the bands previous efforts there is a lot to sift through before getting to the albums more promising moments. That’s not to say the other tracks are bad musically as they all feature impressive arrangements however, those wanting a more straight forward metal sound might want to skip this. Along with “Cirice” I found the tracks “From the Pinnacle to the Pit”, “Mummy Dust” and  “Majesty” to be more to my liking as they featured simpler arrangements that were easier to digest while tracks like “He Is” and “Dues in Absenthia” feature church like orchestral sounds that left me reaching for the skip button.

Yes Ghost and their latest album “Meliora” is a decent album. Will it appeal to everyone? Probably not. There just seems to be a lot of droning and weighty productions elements which make the listening experience a bit annoying. Fans of the band unique sound will certainly enjoy the album as it is quite a bit beefier however I don’t see the album being strong enough to elevate the band to the next level and pull in an entirely new group of listeners.

Track Listing:
Spirit
From the Pinnacle to the Pit
Cirice
Spoksonat
He Is
Mummy Dust
Majesty
Devil Church
Absolution
Dues in Absentia