WWE has definitely been busy in the film industry. They have been cranking out movies non-stop starting their WWE Superstars. “The Marine” series started back in 2006 with John Cena taking on the lead role. The Miz took the lead in “The Marine 3” and is returning in sequel and also features the film debut for WWE Diva Summer Rae. So the two play well off each other. Honestly, who knew that this would turn into a four film franchise that is actually not that bad. In terms of scale, this is a not a scale film but the action is there and is it definitely entertaining.

Official Premise: WWE Superstar Mike “The Miz” Mizanin is back as American hero Jake Carter in an all-new thrill-packed Marine adventure. Now in the private sector, Carter is assigned to protect a “high-value package” – a beautiful whistleblower trying to expose a corrupt military defense contractor. But a heavily armed team of mercenaries has been hired to kill her, along with anyone who gets in their way, and it’s going to take a fearless one-man fighting machine to stop them.

“The Marine 4: Moving Target” comes as a combo pack with a Blu-ray and Digital HD copy. The 1080p transfer is quite impressive, especially for a direct-to-video release. The picture is clear and sharp. Same goes for the DTS-HD Master Audio 5.1, which captures the action very well. In terms of special features, there is not much at all given to us through besides three short featurettes. “Firepower” looks into the weapons in the film and it’s authenticity. “The Franchise” looks into the series and its appeal. Lastly “Beauty is Dangerous” focuses on the film’s cast and their makeup. 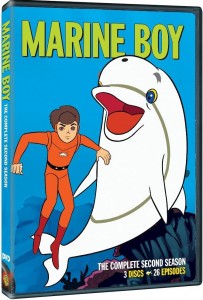 After revisit “Marine Boy” with the first season recently, I was very excited to dive into the second season. This 3-Disc set includes the next 26 Episodes in this classic anime series, which airs from 1966-67. I warn you as cheesy as this show feels today, it is still entertaining and that damn theme song will definitely get stuck in your head. With 52 episodes in the bag, so far we still have another 26 to go, so I expect the third season to hit DVD later this year completing this series.

Official Premise: Marine Boy returns for a second volume of classic ‘American anime’ adventures! Operating out of the Ocean Patrol Marine Headquarters, super-scientist Dr. Mariner outfits his stalwart son with all the aquatic accouterments needed to keep the seas safe for all mankind. From Oxy-Gum and bulletproof wet suit, to flying subs and propeller shoes, Marine Boy has what it takes to face a variety of fearsome foes above and below the ocean’s surface.

Dive deep into the deep with villains like Skwid, Stormbrane, Count Shark, Professor Beelzebub and Captain Wraithand more who must learn to beware the boomerang of Marine Boy as he cruises the sea aboard the submarine P-1 alongside little Clicli, Professor Fumble, mermaid Neptina, dolphin best friend Splasher, and Ocean Patrol agents Bullton and Piper.

Thanks to Warner Archive Collection, this series is continuing to be available to its fans. It is available MOD (manufacture on demand), so if you want it buy it now before it stops being made. These episodes are not flawless but I expect these episodes to have a certain rugged feel to it. These haven’t been restored but have been taken from the best prints available. There are no additional special features available on this release just like the first season. 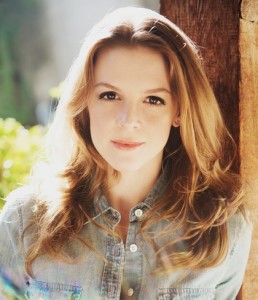 We last spoke with Ashley Bell for her first starring role in “The Last Exorcism”, read it here.  Since then Ashley has been taking over the action genre with strong female roles in films like “The Day” and recently in “The Marine 3: Homefront”.  Ashley is also returning to her role of Nell Sweetzer in “The Last Exorcism Part 2” this month.  Media Mikes had a chance to chat with Ashley again about her passion for these roles and how she enjoys performing her own stunts.

Mike Gencarelli: Did you get involved with “The Marine 3: Homefront” due to your connection with WWE Studios from “The Day”?
Ashley Bell: Yes very much so. Because WWE Studios acquired “The Day” from Toronto Film Festival, it put me on their radar. In talking with them after the release, they wanted to see if I would be interested in working on “The Marine 3: Homefront”. I read the script for the character of Lilly and the role really spoke to me.

MG: What was it about Lilly that drew you to the role?
AB: What I love about Lilly is that even though she is a hostage character she doesn’t give up…she fights. She is more of a wild card. Even if she is retrained with handcuffs, she is searching for the air holes  looking to get out and trying to fight back. I really like that determined spirit that she has. Also in reading Scott Wiper’s script, a lot my scenes are opposite Neal McDonough as well as Mike (‘The Miz’ Mizanin). But Neal is such an incredible actor. There is no one that plays a villain like Neal McDonough. Here is a terrorist but when you first hear him speak he almost makes sense…until he takes it over the top and then you know you are in trouble. I like the arguments that were being fought for – insurance and saving your home and family. So, yes I like the script for sure.

MG: You seem like an actor that isn’t afraid to get out there and get her hands dirty, am I right?
AB: Absolutely! That is when it gets fun for me! If I am not bruised or have some kind of a war wound…then I have not done my job [laughs].

MG: What do you enjoy about performing your own stunts in the action scenes?
AB: Coming from the first “The Last Exorcism”, which I did all my own physicality. Luckily, the roles I am doing now allow me to do my own stunts and going into action. That is really excited for me because I really love action movies! Like I mentioned with these strong female characters. I actually learned Muay Thai for “The Day” and I loved that training. It is just a wonderful form of exercise and I keep it up. Thank God, I did because it takes a lot of stamina in order to be on an action set, which for me is fun. n “The Marine 3”, you see this abandoned cruise ship which has been there for years and that is how it actually looked. It was all rust over and we were doing take after take running down the corridors, up and down the stairs, gun fire going off, explosions, cars are blowing up…and this was what I daydreamed off when I was a kid with my Nerf gun in my tree house.

MG: I got to tell you the the passion is literally coming right out of your mouth. It sounds like you had a blast.
AB: Well, I really did. I really hope I get to continue action since it is a lot of fun for me.

MG: Going from action packed to horror, tell us what we can expect from “The Last Exorcism Part 2”?
AB: This is the continuation of Nell’s story. Here is a girl that is completely shell-shocked from what happened to her. She doesn’t remember what happened at all, she is very vulnerable and shut out from the world. She is drawn out into New Orleans during Mardi Gras and she has to choose between good and evil. I agree do all my own physicality for this one as well. If you have seen the trailer, I do a levitating back bend and I have the stress fracture to prove it [laughs].

MG: After this film are you going to but a “no back-bend  clause in your contract [laughs]?
AB: [laughs] I know right. It is a stress fracture not trauma fracture. I was funny since I panicked when I heard this since I love working out. I love my Muay Thai lessons and taking ballet. So I was afraid I was going to have to stop working out. My doctor actually told me that the cure for something like this is to really build up your core muscles and to actually continue work out. So it hasn’t affected me at all.

MG: How was it for you returning to the character Nell this time around?
AB: It was very different actually. The character of Nell is completely broken. For this script, I was putting her back together and in doing so there was a lot of pieces missing and that is where the devil comes in! And that is where there are scares! Also there is also a different director on board, so it has a very, to be be redundant, different feel than the first one. It was a very new Nell.

MG: You’ve got action, horror – what do you have in the cards next?
AB: Well I am really happy to announce, I have also have a romantic comedy coming out. It is called “The Bounceback” and it is going to be premiering at SXSW 2013.