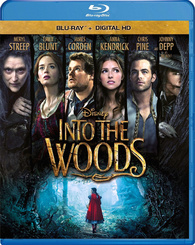 Personally, I am a fan of musicals. I thought Disney was going to knock this out of the park with this A-list cast and a fun musical like “Into the Woods”. This cast in fact did bring their A-game but the film itself ended up being more of a D-grade. The pacing was horrible and jumped around so much. The first and second act were actually decent but the third absolutely ruined the film for me and it dragged on for what felt like forever. They misused talent like Johnny Depp in a less than 5 minute cameo. Chris Pine was the savior of the film, no question but he wasn’t enough to bring it home. Anna Kenndrick was sweet as always and even Emily Brunt surprised me with the whole singing thing…but overall the third act made this too difficult to enjoy.

Official Premise: From the director of “Chicago” and the producer of “Wicked” comes a modern twist on the beloved fairy tales you thought you knew. Meryl Streep stars in this epic musical saga about daring to venture “Into the Woods”. Iconic characters, such as Cinderella, Little Red Riding Hood, Jack and the Beanstalk and Rapunzel, find their fates intertwined with a humble baker and his wife, whose longing to have a child sends them on a quest to reverse a witch’s (Streep) curse. With an all-star cast, this spellbinding adventure is everything you could ever wish for!

Despite the film being terrible, Disney did deliver an outstanding Blu-ray along with a digital copy included. The 1080p transfer was perfect and really captured the fairy tale feeling of the film. It worked well with the CGI and with the scenery. The DTS-HD Master Audio 7.1 was also a showstopper. The songs in this film were fun and this was really well presented. As much as this pains me to say, this is truly an amazing Blu-ray in terms of audio and video, even the special features were impressive as well.

Started off the extras, there is an audio commentary track from Director/producer Rob Marshall and producer John DeLuca and they discuss the film in depth from every aspect. Pretty interesting stuff. “Strep Sings Sondheim: “She’ll Be Back”” is a feature on the actress singing the deleted song. “There’s Something About the Woods” features cast/crew discussing the production. “The Cast as Good as Gold” is another chat with the cast discussing the pre-production of this film. “Deeper Into the Woods” is a four-part documentary, which runs about 30 minutes. Lastly, “Music & Lyrics” runs about an hour and pretty much gives you the option to watch the songs in the film only with karaoke-style lyrics.