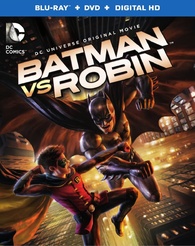 “Batman vs. Robin” is the latest DC Universe animated original movie. It is based on Scott Snyder and and Greg Capullo’s “Court Of Owls” story. This is an exciting film for an DC Universe fan. They have been really stepping up their games with their animated films. As far as their films go, this is no “Dark Knight Returns” but it is another good step forward for DCU, with a good story and some classics Batman baddies. Can’t wait to see what they have planned next for “Justice League: Gods & Monsters” out later this year!

The voice cast is quite impressive with both Jason O’Mara and Stuart Allan reprise their respective roles of Batman/Bruce Wayne and Robin/Damian. The rest of the voice cast includes Jeremy Sisto as Talon, musician Weird Al Yankovic as The Dollmaker, David McCallum as Alfred, Grey Griffin as Samantha, Sean Maher as Nightwing, and Kevin Conroy as Thomas Wayne. Cool to see Kevin Conroy return to the franchise and sticking with the Wayne name.

Official Premise: The shadows of Gotham City are no place for a child but Damian Wayne (Stuart Allen) is no ordinary child. Now bearing the mantle of Robin, he blazes a headstrong and sometimes reckless trail alongside his father, Batman (Jason O’Mara). While investigating a crime scene, Robin encounters a mysterious figure, Talon (Jeremy Sisto), who leads him on a life-altering course through the depths of Gotham’s secret society, known as The Court of Owls. It’s a dangerous journey that will force Batman and Robin to face their most dangerous adversary: each other.

Warner Bros is releasing this as a Blu-ray/DVD/Digital HD combo pack as well as a Deluxe Edition gift set (which includes a Batman figurine). The 1080p transfer is on par with the rest of the DC Univere animated movies. Like expected from a Batman film, it is dark but it looks great and the shadowing is impressive. The DTS-HD Master Audio 5.1 surround track is also powerful and very entertaining.

The special features included are not bad either. “Gotham’s City Secret: The Mythic Court of Owls” look into the background of the secret society and their connection with Gotham. “Talons of the Owl”  takes a look at the Owls and their assassins called The Talons. There is an audio commentary track included, as a Blu-ray exclusive. Like past Blu-rays, there are bonus cartoons from the DC Comics Vault. Lastly there is a sneak peak at “Justice League: Gods & Monsters”.