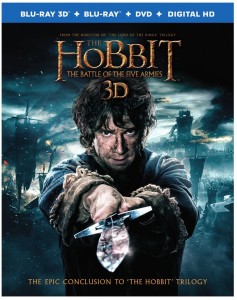 I am a huge fan of both “The Lord of Rings” and “The Hobbit” film series. I have to admit though, “The Hobbit: The Battle of the Five Armies” is easily the weakest entry in Peter Jackson’s entire six-chapter saga. Now it is not terrible at all but in terms of the scale of the other films it just does not live up to be the closing chapter in a six film saga. We all know that “The Hobbit” was a very short book and these three films have been expanded to enable a trilogy but this third film just feels too stretched out. There is like an hour long battle scene, which I wouldn’t never think this would happen but it just feels boring. This film could have easily been summed up in the second film and probably made that a better film also. The cast are still top notch and both Richard Armitage and Martin Freeman really shine here.  Honestly a little sad to see this chapter close but who knows maybe their will be future Middle Earth adventures in the future (hopefully).

“The Hobbit: The Battle of the Five Armies” brings to an epic conclusion the adventure of Bilbo Baggins (Martin Freeman), Thorin Oakenshield (Richard Armitage) and the Company of Dwarves. The Dwarves of Erebor have reclaimed the vast wealth of their homeland, but now must face the consequences of having unleashed the terrifying Dragon, Smaug, upon the defenseless men, women and children of Lake-town. As he succumbs to dragon-sickness, the King Under the Mountain, Thorin Oakenshield, sacrifices friendship and honor in search for the legendary Arkenstone. Unable to help Thorin see reason, Bilbo is driven to make a desperate and dangerous choice, not knowing that even greater perils lie ahead. An ancient enemy has returned to Middle-earth. Sauron, the Dark Lord, has sent forth legions of Orcs in a stealth attack upon the Lonely Mountain. As darkness converges on their escalating conflict, the races of Dwarves, Elves and Men must decide – unite or be destroyed. Bilbo finds himself fighting for his life and the lives of his friends as five great armies go to war.

“The Hobbit: The Battle of the Five Armies” is releasing this film as a 5-disc combo pack with a 3D Blu-ray + Standard Blu-ray + DVD and also Digital HD copy. The 3D on this film was good but I wasn’t blown away like the second film actually. I didn’t really feel like it added much to the film other than some depth. The 1080p transfer though was fantastic. This series has excelled in the audio and video department since the very first “The Lord of the Rings”. The DTS-HD Master Audio 7.1 surround track is also perfect. Since the film is basically one long fight scene, this track really stands up and delivers an action packed adventure at every turn. From dragons spewing fire to metal clanging, this track is exciting and intense.

Like previous releases in this trilogy, the initial Blu-ray special features have not been outstanding. It is the Extended Edition releases set for each Fall that have impressed. This Blu-ray includes some decent extra still. First up is “New Zealand: Home of Middle-earth Part 3”, which is an overview of the third film and its shooting locations. “Recruiting the Five Armies” looking into the casting, costumes and everything else involved with creating this army. “Completing Middle-earth: A Six-Part Saga” is an interview with Director Peter Jackson introduces discussing the last film, as is also “Completing Middle-earth: A Seventeen-Year Journey” taking about the saga as a whole. “The Last Goodbye: Behind the Scenes” looks into the creating the film’s end credits with actor Billy Boyd’s “The Last Goodbye.”, also included is the music video as well.