This evil fairy of a friend is sure to cast a spell in her signature look. Summon a sense of style that’s fit for a sorcerer by adding the black and purple robe to your bear’s wardrobe. In order to be her most powerful, the mistress of all evil can also wield her scepter. This golden plush scepter is a wickedly cute wrist accessory that attaches to your Disney Maleficent Inspired Bear’s paw!

Enter a fantasy world of fun with this wickedly cute collector’s item. Collectors and fans alike are sure to fall under the spell of this Disney Maleficent Inspired Bear! 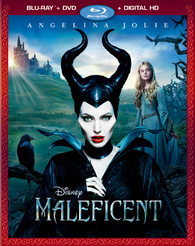 I went into “Maleficent” prepared to be wowed by the visual appearance and I got much more than I expect. The film plays out what a live-action fairy tale is really like. I loved this film. This was a role that was meant for Angelina Jolie. She nails it so well, even from the most subtle lip moments, she is outstanding. The story is also not what you would expect from the tale of “Sleeping Beauty”, this is not just a retelling of the classic story. I love the path that they decided to take with this and it is just a ton of fun to watch! I want sequel Disney!! Bring it on! I am just very disappointed in Disney though that they are skipping the 3D Blu-ray for this film. I loved the 3D in this film it added so much to the film. The film made over $750 million worldwide Disney, why you being cheap on us U.S. fans!?

Official Premise: Maleficent tells the untold story of one of Disney’s most iconic villains. A beautiful, pure-hearted young woman, Maleficent (Jolie) has an idyllic life growing up in a peaceable forest kingdom, until an invading army threatens the harmony of the land. Maleficent rises to be the land’s fiercest protector, but she ultimately suffers a ruthless betrayal; an act that begins to turn her pure heart to stone. Bent on revenge, Maleficent faces an epic battle with the invading king’s successor and, as a result, places a curse upon his newborn infant Aurora. As the child grows, Maleficent realizes that Aurora holds the key to peace in the kingdom, and perhaps to Maleficent’s true happiness as well.

Disney is releasing this film as a combo pack with a Blu-ray + DVD + Digital HD including Disney Movies Anywhere. I have been enjoying the Disney Movies Anywhere site but they need to get their asses in gear and get on board with Android systems. The 1080p transfer is still outstanding even though I would have preferred this film in 3D. The colors are vibrant and the design of the feel just looks so freaking slick and sharp. The DTS-HD Master Audio 7.1 is a thing of beauty as well. The score for this film was unbelievable and really acted like a character in the film. It has that fairy tale feel that really adds a lot to the film.

The special features are another score for this release. There are five featurettes taking us behind the scenes on this beautiful film. “From Fairy Tale to Feature Film” takes us through how they re-imagined “Maleficent” for a new generation. “Building An Epic Battle” focuses on the fight between Maleficent and King Henry’s Forces, which was quite epic. “Classic Couture” looks into the wonderful head piece and other accessories in the film. “Maleficent Revealed” dives into the special effects. “Aurora: Becoming A Beauty” features Elle Fanning talking about the role. There are also a bunch of deleted scenes included.

One of my sister and I’s favorite Disney films growing up was “Sleeping Beauty”. We used to watch it over and over. So we were both really excited for the new Disney film “Maleficent”. Right after seeing the new film, I immediately went online to see if there was an art of book released for the film. What I found was this book. I have to admit, I am a little disappointed personally. I would have thought that Disney would have released a nice hardcover solo art of/making of book for “Maleficent”. This does still contain a great wealth of information covering all aspects of the story of “Sleeping Beauty”. This book still is worth checking out if you love “Sleeping Beauty” but in no way should it be considered an acceptable replacement for an art of book for “Maleficent”.

Disney’s “Sleeping Beauty” remains one of the most beloved of all fairy tales. The story itself was originally published by Charles Perrault in 1697. For more than 300 years, this story has been adapted by many different artists and authors. The best part of this book (if you can look past the lacking cover art) is that is is jam-packed with great illustration that folow the history of that fascination of this story of “Sleeping Beauty” from literature, fine art, poetry, music, and film. Author Charles Solomon is an internationally respected critic and historian of animation. He has written numerous amazing books for Disney including “The Toy Story Films: An Animated Journey”; “Tale As Old As Time: The Art and Making of Beauty and the Beast” and many more. He is a guy that knows Disney and he is definitely the write before for this job. I was am just hung up on the fact that Maleficent didn’t get more focus.

Briar Rose/Aurora was and still is one of the most beautiful and beautifully animated of the Disney princesses. The film also featured one of Disney’s best villains still to date, Maleficent. Perrault’s created such an amazing character here that she has still leaves fear in the heart of its viewers/readers. As well as covering the literature and animated film of the story of “Sleeping Beauty”, this book also touches (I use that lightly, since “Maleficent” could have fill a book on its own) on the new film “Maleficent” with interviews with Angelina Jolie, Imelda Staunton, Linda Woolverton, Sean Bailey, Joe Roth, Don Hahn, and director Robert Stromberg (Oscar-winning art director of Avatar and Alice in Wonderland). There is some behind-the-scenes details and photography; costumes, props, and makeup included as well.

THIS is how you update a classic tale.

Deep in the heart of a jungle kingdom, we meet the young and beautiful Maleficent (Isobelle Molloy). Living, as she does, in an enchanted kingdom, Maleficent spends her days climbing trees and mending twigs which have been accidentally snapped. One day the young girl meets a young man from the neighboring kingdom. His name is Stefan and for quite a period of time the two youngsters spend their days together learning about themselves and each other. When Maleficent turns 16 if is gracious Stefan that offers up, and gives her, “true loves’ kiss”). But it is not meant to be. Years go by. Maleficent is now a beautiful woman (Jolie), flying over her kingdom and protecting everything in it. Right over the boundary line we find the old and bitter king, close to death. He has promised to anoint whoever can find and kill Maleficent his successor. Now grown up, Stefan (Copley) lures Maleficent to him. Betrayal follows. As does revenge!

It almost sounds like a cliché’ to say this, but in my opinion no one BUT Angelina Jolie could have played Maleficent. Already unworldly beautiful, with a little assist from seven time Academy Award winning make-up expert Rick Baker, her angular face is perfect in showing the joy she feels among her fellow kingdom denizens and the betrayal she feels by her circumstances. The story will be familiar to anyone that has enjoyed hearing about “Sleeping Beauty,” but with a few “adjustments” that make the legend not only more exciting but downright horrifying.

But it is not just Jolie that gives the tale a sense of believability. As now-King Stefan, Copley delivers a performance equal in power to Jolie’s. Here is a man who betrayed the one he loved only to suffer forever for his actions. And if you’re going to talk about Sleeping Beauty, you can’t forget the newly named Princess Aurora (Elle Fanning) whose innocence is as strong as she is beautiful. The film is quite dark in some places…maybe more than one would expect.

Add to those great performances some stunning visual effects and you’ve now got proof to the old adage that you CAN teach an older dog a new trick. Take flight with Maleficent and learn a new chapter to an amazing story.

To celebrate the release of “Maleficent” in theaters, Media Mikes is excited five (5) copies of the Original Motion Picture Soundtrack to our readers. If you would like to enter for your chance to win one of this prize, please leave us a comment below or send us an email with your favorite Angelina Jolie film. This giveaway will remain open until June 13th at Noon, Eastern Time. This is open to our readers in US and Canada only. One entry per person, per household. All other entries will be considered invalid. Media Mikes will randomly select winners. Winners will be alerted via email.

All-new soundtrack that includes a new take on the original Disney classic, Once Upon a Dream, performed by Lana Del Rey. Original score composed by 8-time Academy Award nominee, James Newton Howard. The official soundtrack to the Walt Disney Studios film Maleficent, starring Angelina Jolie. This visually dazzling live action film explores the origins of one of the most iconic Disney villains: Maleficent, the infamous fairy who curses Princess Aurora in Disney’s animated classic Sleeping Beauty. This ‘origin’ story is told from Maleficent’s perspective, intersecting with the classic in both familiar and unexpected ways. The movie stars Academy Award-winning actress Angelina Jolie as Maleficent, and is directed by two-time Oscar-winning production designer Robert Stromberg (Avatar, Alice in Wonderland). The film co-stars Elle Fanning (Super 8) as the Princess Aurora, and features Sharlto Copley (District 9), Imelda Staunton (Harry Potter and the Order of the Phoenix), and Juno Temple (Atonement).