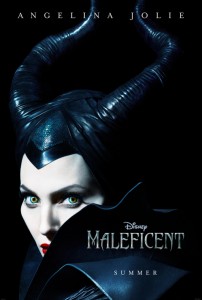 THIS is how you update a classic tale.

Deep in the heart of a jungle kingdom, we meet the young and beautiful Maleficent (Isobelle Molloy). Living, as she does, in an enchanted kingdom, Maleficent spends her days climbing trees and mending twigs which have been accidentally snapped. One day the young girl meets a young man from the neighboring kingdom. His name is Stefan and for quite a period of time the two youngsters spend their days together learning about themselves and each other. When Maleficent turns 16 if is gracious Stefan that offers up, and gives her, “true loves’ kiss”). But it is not meant to be. Years go by. Maleficent is now a beautiful woman (Jolie), flying over her kingdom and protecting everything in it. Right over the boundary line we find the old and bitter king, close to death. He has promised to anoint whoever can find and kill Maleficent his successor. Now grown up, Stefan (Copley) lures Maleficent to him. Betrayal follows. As does revenge!

It almost sounds like a cliché’ to say this, but in my opinion no one BUT Angelina Jolie could have played Maleficent. Already unworldly beautiful, with a little assist from seven time Academy Award winning make-up expert Rick Baker, her angular face is perfect in showing the joy she feels among her fellow kingdom denizens and the betrayal she feels by her circumstances. The story will be familiar to anyone that has enjoyed hearing about “Sleeping Beauty,” but with a few “adjustments” that make the legend not only more exciting but downright horrifying.

But it is not just Jolie that gives the tale a sense of believability. As now-King Stefan, Copley delivers a performance equal in power to Jolie’s. Here is a man who betrayed the one he loved only to suffer forever for his actions. And if you’re going to talk about Sleeping Beauty, you can’t forget the newly named Princess Aurora (Elle Fanning) whose innocence is as strong as she is beautiful. The film is quite dark in some places…maybe more than one would expect.

Add to those great performances some stunning visual effects and you’ve now got proof to the old adage that you CAN teach an older dog a new trick. Take flight with Maleficent and learn a new chapter to an amazing story.