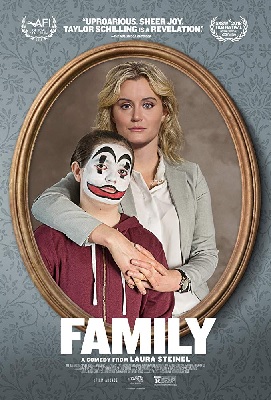 At the start of Laura Steinel’s Family, we find hedge fund manager Kate (Taylor Schilling) getting beaned in the head with a bottle of orange soda at the Gathering of the Juggalos. It’s an ambitious and fitting start for a film whose primary appeal is celebrating outcasts. As it turns out, Kate is hunting for her niece, Maddie (Bryn Vale), a middle school oddball who was entrusted with her aunt for the week while her parents dealt with grandma’s hospice care. Overworked city-dweller Kate is not the least suited for childcare but winds up being the kind of outside perspective that Maddie needs in her life while her hover-parents are distracted. Though it strays unnecessarily at times, at its best moments Family works as a well meaning tribute to letting your freak flag fly.

Kate is some sort of financial guru who’s climbed the corporate ladder by presumably shirking personal attachments and steadily getting drunk with important clients. It’s the kind of movie where office drones scramble over gaining or losing “THE IMPORTANT SOUNDING NAME ACCOUNT!” but you never know what they’re actually doing because it doesn’t matter. If that set up makes you roll your eyes, I get it, I’m really reluctant when it comes to the “cold career woman softens up with a kid” trope. That said, Schilling does well by leaning into how honest and awkward Kate can be. She says what’s on her mind without the finesse demanded by social mores and even if she’s right–and she sometimes is!–her coworkers ostracize her. I sympathized with Kate despite some of her callousness because Schilling can be so funny and charming and it rings absolutely true that a woman in this environment can more easily fall off the tightrope that is the line between “speaking your mind” and being pegged as a bitch. Her work life is interrupted when her brother calls on her for babysitting duties and she’s saddled with 14 year old Maddie. Kate is supposed to be picking her niece up from ballet but finds her instead in an adjacent karate studio where she’s been secretly studying under sensei Pete (Brian Tyree Henry, just one of a number of strong supporting cast here) for weeks. And that’s just the tip of the iceberg for the disconnect between how Maddie’s parents are raising her and where her actual interests lie.

Kate and Maddie’s relationship is definitely the strong point of the film. Bryn Vale brings a frankness to Maddie that allows Kate to open up to her. Maddie knows who she is, she knows why the other kids mock her and while she might avoid them, she is not even attempting to conform to them. Instead, Maddie takes a shine to fellow weirdos at a convenience store who introduce her to the Insane Clown Posse despite Kate trying to shoo them away. An ill-fated attempt at a makeover from Aunt Kate is a standout sequence. There’s also something very endearing about this awkward niece looking at Kate hopefully when in actuality she’s falling apart inside her business-attired exterior. The trouble comes when Steinel’s script attempts to go off on tangents with Kate–a random meetup with her father in rehab, a tacked on subplot with a nosy neighbor (Kate McKinnon)–when she should have stuck with the Maddie-Kate relationship. It’s as if Kate has to make amends with literally everyone in her life before the credits roll instead of allowing her to simply have her heroic juggalo transformation for the love of her niece.