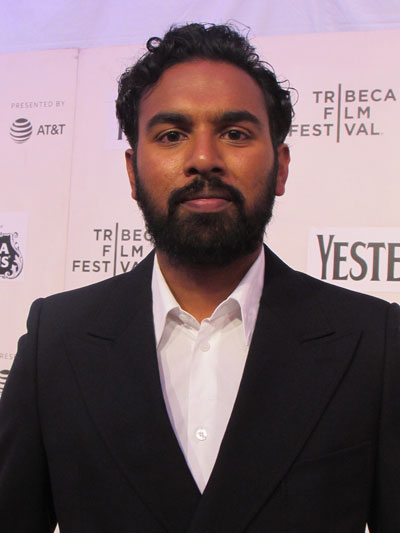 Yesterday…or rather just about a month ago Danny Boyle’s new romantic comedy called Yesterday hit the red carpet as the closing night film of the Tribeca Film Festival. Written by romcom guru Richard Curtis (Love Actually, Four Weddings and a Funeral), the film follows Jack Malik (Himesh Patel) a struggling musician who wakes up one day in a world where the Beatles never existed. In this situation, Jack takes the music world by storm reintroducing classics like “Yesterday”, “Let it Be” and “Hey Jude”.

I got to speak with the talented filmmakers at their premiere about the impact the Beatles had in their own lives and shooting some epic concert scenes.

Lauren Damon: Soundtracks are so integral to your movies, does it pain you to imagine the world without the Beatles?

Screenwriter Richard Curtis: I think it would be worse! I mean certainly my life would have been worse. You just think how often life has been sort of softened and sweetened by them. When I was living here in America, I was terribly aware of how often you heard Frank Sinatra and I was thinking, ‘God, wouldn’t all these shoe shops be worse without Frank Sinatra to make it less painful?

LD: For the concept of this film did you ever consider other bands being gone?

Curtis: No. No and it’s interesting, is there another band? And I don’t know that there is. A lot of this movie came about was because every time I would go to see my kids’ school plays they would always end with a Beatles song. You know, William the Conqueror would hold King Harold’s hand and they would both sing “We Can Work it Out.” Or you do something about the environment and they sing “Here Comes the Sun.” So I do think at the moment that the Beatles are the most comprehensive band of all.

LD: Did you get to speak to Paul or Ringo about this concept?

LD: When you’re starting with a film that’s based around The Beatles when you go in to compose for it, do you draw strains for them? Or is it from scratch?

Pemberton: Yeah, the score element of this film has been massively influenced by the Beatles. So that’s everything from–I tried to approach the score in a way where we would use the sort of sonic landscape the Beatles created. So that would be everything from the instruments, like the mellotron…We actually used some of the actual instruments that the Beatles recorded on. So we recorded at Abbey Road all the score. And so we used things like the Mrs. Mills piano–the piano from “Lady Madonna”. And those are the actual pianos they used on the recordings. We’d also use a similar kind of bass guitars that Paul McCartney plays. We used the same mixing desks and the same recording techniques. But then we tried to write a different score that wasn’t just a pastiche of the Beatles but just had the elements of their work. Almost as if the Beatles had scored this movie, what would it sound like?

Lauren Damon: What was your casting process like to go from tv into this big lead in front of thousands of extras?

LD: Do you have a singing background?

Patel: Not in any sort of professional way, no. I did a little bit on the stage in a play I did a couple of years ago. And I’d some, you know, for myself, youth theater and that kind of thing but nothing like this.

Patel: It was thrilling, you know but also a little bit nerve-wracking. The people I was working with, the people we got on board with were really great and so I never felt the pressure of what we were doing. And we had a little bit of leeway because narratively the songs don’t exist. So we could make them our own.

LD: Do you have a favorite?

Patel: A favorite…I mean, one of the ones I love singing was “Long and Winding Road.” I think it’s a really beautiful song…and where it sits in the movie is so beautiful too.

Yesterday is out this weekend in theaters