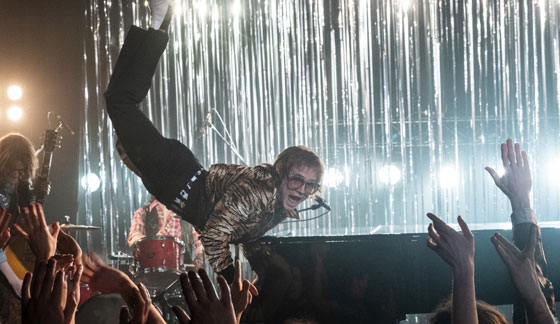 Not sure if it’s a coincidence or not, but Paramount has chosen to release the new Elton John bio-pic, “Rocketman” the same week that, 47 years ago, the song “Rocket Man” made it’s debut in America on the Billboard Top 40 Chart. That song was so popular that I can remember my 7th grade teacher bringing in the lyrics for everyone in class to read and discuss their meaning. Heady stuff. As is the film.

We first meet Elton John (played in an award-worthy performance by Egerton) as he walks into a group therapy session. He obviously sticks out. But not because he’s Elton John. It’s because he is wearing one of the flamboyant outfits – complete with oversize glasses – he has become famous for. After he introduces himself and rattles off his many issues – alcoholic, drug user, sex addict – he begins to reflect on his life and the journey that took him from a shy English boy named Reginald Dwight (something to remember if you play trivia) to the gregarious superstar named Elton.

Full of great music and fantastical spectacle, “Rocketman” appears to be what everyone who found “Bohemian Rhapsody” lacking (I didn’t – I thought it was one of the best films of the year) – wanted it to be. Rather than a straight – no pun intended – bio-pic, “Rocketman” is more of a look at the life of a superstar through his increasingly large and rose colored glasses (the film’s director – Dexter Fletcher – took over “Bohemian Rhapsody” after original director Bryan Singer was let go). We learn that Elton’s father (Steven Mackintosh), who was a music lover, had no time or even interest in the young man, usually only speaking to him when scolding him. His mother, played by an almost unrecognizable Bryce Dallas Howard, obviously loves her son but has other interests. It’s left up to his grandmother (Gemma Jones) to recognize his brilliance – he can hear a piece of music once and then play it flawlessly on the piano. She’s the one who takes him to the Royal Academy each Saturday (he studied there for four years).

Reg is recruited to play in a backing band for visiting American groups and, when answering an ad looking for musicians, is handed a random envelope of lyrics and told to “do something with this.” The lyrics were written by Bernie Taupin (Bell) and, after the two are introduced, they would go on to be perhaps the greatest songwriting duo after John Lennon and Paul McCartney.

Egerton does a great job inhabiting the role. Besides physically resembling the singer, Egerton also sings the songs here. And while
he doesn’t sound a lot like Elton John, he does a fine job in his phrasing and in capturing the emotional moments of the music. Bell is equally good as Taupin while Richard Madden is both smoothly suave and cruelly businesslike as John’s manager (and lover) John Reid.

Don’t go into the film looking for facts. There are many “errors” (including John playing a song in the late 60s that he and Taupin actually wrote in the early 80s) in the story that are used to keep the story moving, which didn’t really bother me. My problem with the film was the occasional “over the top” production numbers that took away from the drama and emotion of the scenes. And there are some emotional moments. Most heartbreaking is when John gets up the courage to tell his mother he is gay. She tells him she has known this, but also tells him that, because he is gay, he will never be loved properly.

If you are even a slight fan of Elton John, you will find the film, and it’s music, enjoyable. And if you’re lucky enough to catch Elton John on his farewell tour, I urge you to go. That experience is even more enjoyable