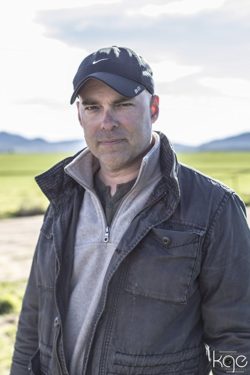 Harrison Smith is the writer and director of the new horror film “Death House”, which is being called the Expendables of the horror genre! This film is jam packed with dozens of icons including Kane Hodder, Dee Wallace, Tony Todd, Bill Moseley and many more! B. Harrison took out some time to chat with Media Mikes about the film and what we can expect for the future!

Mike Gencarelli: Tell us about how you first got involved with “Death House”?
B. Harrison Smith: All of that can be found here. It’s my personal blog called Cynema. It has four articles called “The Road To Death House” series which answers everything you need to know.

MG: How much did Gunner Hansen complete before his passing?
BHS: Gunnar did the original script. That’s covered in the “Road to Death House” series on my blog. The script that’s shot is 90% mine. I kept his concept of the Five Evils and the issue of good and evil’s dependency on each other. However Gunnar’s original script was about a team of filmmakers going into an abandoned asylum where they were killed off. So it’s pretty different. He gave the script his blessing before he died. He was happy with what I did. He was such a good person.

MG: What was it like to work with so many horror legends?
BHS: Educational. They know so much. They’ve seen so much and how the industry has evolved and changed for the better and worse. I loved the fact that I grew up watching them in theaters and late night cable and video and now I work with them. That’s the best thing.

MG: Were there any talent that you reach out to that turned you down or that you weren’t able to get for this film?
BHS: Sure and it was due to scheduling. When the money finally moved it didn’t jive with everyone’s schedule. Robert Englund was in the middle of three projects and flying to Scotland. Bruce Campbell was smack dab in the middle of the Evil Dead tv show but they were really nice about it and supportive. What can you do? The project had been on and off again for years. They had to work. Hopefully the next one we will get them!

MG: What was one of the coolest moments you had on set during production?
BHS: There were a few but one that comes to mind was watching the interaction between Kane, Bill, Michael. They’ve known each other so long. They’re icons and they fuck with each other like high school kids. They did this three stooges “hello, hello, hello” bit and it was classic.

I also got to eat lunch with Sid Haig who just told me so much about the industry over the last 50 years. He’s a wealth of information and stories and I was so privileged to have him share them with me.

MG: On the flip side, what was the hardest part of the production?
BHS: Having a low budget and 24 day shoot schedule. I think most indie filmmakers will cite money and time as the biggest issues. There were no divas. No “creative differences.” The people part and crew part was easy. Time and money…they’re the hurdles.

MG: According to IMDB I see there is a prequel in the cards, “Dawn of 5 Evils”, is this next for you? Give us a tease on what we can expect?
BHS: Producer Rick Finkelstein wants it and I’ll oblige. It’s a prequel and that title will change. That’s just a working title for now but It will examine the backgrounds of the Five Evils and their origins.

MG: What is your wishlist cast for the next film in the franchise?
BHS: Ah hell, if I do that and leave anyone off then I piss off potential cast. I hope everyone for the sequel returns and I look forward to new faces as well.

MG: Fun question, if you could remake/reboot one horror film, what would it be?
BHS: I’m not against remakes when they’re warranted. There have been some great ones: “Invasion of the Body Snatchers” ‘78, “The Blob”, “Night of the Living Dead”. So if I had my choice, I’d love to get a crack at remaking “Let’s Scare Jessica To Death.” I love the original but I think there were things limited by budget and time. The original sits on my DVD shelf and it scared me since a kid.

MG: Favorite childhood horror film that inspired you to your current role today and why?
BHS: I always say the original “Jaws” is the movie that made me want to make movies. But I’m not sure I classify Jaws as a horror film. But that’s the one. I was 8 when I saw it in 1975 in theaters and I told my mom afterward that I want to make movies when I grew up. I wish she’d lived to see that happen.

I recently had the privilege of sitting down with actress Linda Harrison. Ms. Harrison is best known in the Pop Culture world for her work in the first two Planet of the Apes films as well as Ron Howard’s Cocoon and its sequel. She is also a fountain of behind-the-scenes knowledge thanks to her marriage to Oscar-winning producer Richard Zanuck. Ms. Harrison was also originally slated to play the role of the police chief’s wife in Jaws. As Mr. Zanuck relates on the extended behind-the-scenes version found on the Jaws boxed laser disc set, Ms. Harrison was offered the role. However, Universal Studios president Sid Shienberg had offered the part to his wife, actress Lorraine Gary. According to Mr. Zanuck, to smooth things out, Shienberg picked up the telephone and called the producer of the upcoming film Airport 1975, William Frye. “Bill,” Shienberg said, “you’ve got another passenger on your airplane.”

Born in Maryland, Ms. Harrison was the first runner-up in the 1965 Miss USA pageant. In November of that year, she signed a seven year deal with 20th Century Fox. Her television debut came in back-to-back episodes of Batman in 1966. She was then cast as Nova in Planet of the Apes and its sequel, Beneath the Planet of the Apes. She has also appeared in the above-mentioned Airport 1975 (she is billed as “Augusta Summerland”), Cocoon, Cocoon: the Return, and had a cameo in Tim Burton’s updated version of Planet of the Apes.

Now divorced from Zanuck, she is the proud mother of two sons, Harrison Zanuck and DeanZanuck, who both work in the film industry. Interested fans are encouraged to check out her web site, www.LindaHarrison.com. Still as strikingly beautiful in person, Ms. Harrison sat down with me at the recent Planet Comicon in Kansas City.

Mike Smith: It’s been our four decades since the original Planet of the Apes was released. Did you ever think while filming that you were creating something that would be, and still is, regarded as a true classic?
Linda Harrison: I think somewhere in my mind I may have thought that. I saw it as an unusual film and went on from there to do other things.

MS: Including the recent Apes film, in which both you and Charlton Heston have a cameo, you’ve appeared in 6 major films. Heston is in 4 of them. Coincidence?
LH: I know. It’s just incredible how much I’ve worked with him. Things just seem to fall that way.

MS: If Beneath the Planet of the Apes had ended on a happy note, with everyone alive, who do you think Nova would have ended up with: Taylor (Heston) or Brent (James Franciscus)?
LH: Taylor! (laughs) No hesitation!

MS: Are there any outtakes of you laughing hysterically when Heston goes into his “you maniacs!” speech at the end of Planet of the Apes?
LH: (laughs) No, I don’t think I laughed hysterically. It was a pretty, I won’t say somber set, but we were dealing in new territory that had never been done on film. So everybody was really at attention, wondering what the next shot was going to be. It was pretty unusual to be sitting there with apes!

MS: My favorite film is Jaws. I was so taken by the film and the performances that I ended up starting Roy Scheider’s official fan club and helped run Richard Dreyfuss’s. Had Sid Sheinberg not outranked Dick Zanuck, you would have been bombarded with mail from me YEARS ago! Did you know from reading the script that Jaws wasgoing to be special?
LH: I remember when Dick was reading the galleys (which is basically the book before it’s published) that he had a really great instinct that this would be a great picture. He knew it would be tough trying to make a 25 foot shark, but he pulled it off. It’s that really classic horror film that still surprises and scares you (mimics a shriek) when you’re not expecting it.

MS: Please tell me that had you done Jaws you would have passed on Jaws: the Revenge?
LH: Oh, sure!

MS: So, what are you doing now?
LH: Actually I’m now what they call a convention celebrity. I try to do one show a month, some do more. I’m also concentrating on my web site.

MS: Are the fans very receptive?
LH: Very. More then I ever imagined.