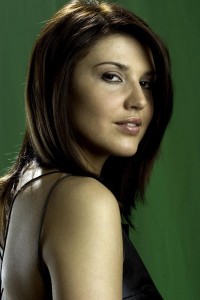 Barbara Nedeljakova is known best for her role in the film “Hostel”.  She has also been in a bunch of other genre films like “Children of the Corn: Genesis” and the upcoming “The Hike” and “Strippers vs. Werewolves” with Robert Englund.  Media Mikes had a chance to chat with Barbara over Skype and chatted about her roles to date and working with such great talent and directors.

Mike Gencarelli: Looking back on “Hostel”, what was the most challenging part for you on the film?
Barbara Nedeljakova: It was my first major role and I was new to the horror genre. The first scene we shot actually was my death scene. I think the whole story was a challenge. I wanted the audience to like me in the beginning and to be all sweet and innocent. The whole transformation to become evil and cold-blooded was interesting and challenging. To find the truth in a role in a good challenge to have.

MG: Tell us about working with Eli Roth?
BN: It was great experience. It is probably my best experience on a set. Eli is great and is very excited about being on a set and working with his actors. He makes you feel very confident. His energy was great and so fun to be around. When we were shooting bloody scenes, he was jumping around and all excited and has had such energy. I would love to work with him again definitely.

MG: Tell us about working on “Children of the Corn: Genesis”?
BN: It was a very small cast. We shot the film in a desert outside of Los Angeles. I play a mother of one of the boys and that was pretty 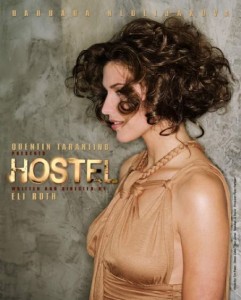 interesting. Billy Drago plays my husband. He is this creepy preacher and I am his abused wife, right out of Russia. There is this couple that comes to our house and they have no idea what they are getting into. It was interesting playing a mom in this role and it was definitely a different kind of part.

MG: What can you tell us about your role in “The Hike”, directed by Rupbert Bryan?
BN: It is a very dark film and also very violent. They had a screening and I took a bunch of my friends and they left feeling sick. It is very realistic. It is a about a reunion of a few girls that haven’t seen each other in a few years and they go for this hike and, of course, everything goes bad. It is going to be for people who can take real gore.

MG: The film looks like a “Hostel” in the woods, tell us about the shoot?
BN: Yeah, there was a lot of dark and difficult scenes that we had to shoot in the woods at night. There was also a lot of bad weather and rain during the shoot. We also had to be some pick up shots like a half a year later back in the forest in the same outfits…in the snow. So yeah, it was a little challenging.

MG: Tell us about working on the film “Isle of Dogs” and when can we see it?
BN: “Isle of Dogs” is basically a story about a betrayal. It had a lot of fighting and drama scenes. The whole film is about chasing and we had a lot of stunt work, so it was exciting for me. I know they are currently editing and doing some re-cuts.

MG: Tell us about your role of Raven in “Strippers vs. Werewolves” with Robert Englund? 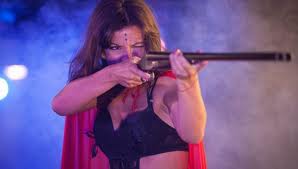 BN: [laughs] Yeah, I just finished that one a few months ago. It is a horror comedy. It was fun. My role was a sexy but strong girl who takes the gun and shoot them in the balls. I had a lot of fun doing it. Unfortunately, I didn’t get to be on the set the same day as Robert and didn’t get to meet him.

MG: What film did you recently film in London?
BN: I worked with the same director from “Isles of Dogs”, Tammi Sutton. The film is called “Whispers”. It is a mystery drama. It is a small cast. It follows two couples and a house. Not sure how much I can giveaway but there is a woman who recently lost her child. I am playing this Russian girl, who is a real bitch. Things go wrong and one by one we get picked off. It was a fun film to work on.