“Hansel & Gretel: Witch Hunters” is exactly what you would expect…over-the-top and fun..and that is all.  The action is pretty awesome and the film is quite gory for us horrorhounds.  The make-up effects are also pretty sharp. Overall, it is just mindless entertainment. For fans of “The Avengers”, did I mention it has Hawkeye in it? Jeremy Renner is fun in the role, poking fun at his character, as is Gemma Arterton, who isn’t hurting on the eyes either.  Famke Janssen also has a great role in the film and plays a great witch. This is also the American film debut of Norwegian director Tommy Wirkola, who did the 2009 feature “Dead Snow”, which is another fun zany horror/comedy with Nazi zombies.

All that going for it and did I mention it is also in 3D? They most definitely take advantage of the third dimension as well and it works in the film’s favorite for more added fun. The 3D makes the film entertaining and there are a few great in-your-face gore shots and fireballs thrown at the screen. The film was delayed to be post converted but I think they have really mastered post conversion process…anyone see “Iron Man 3″? The film wasn’t a huge hit in the US but good enough…I hear that there is already a sequel in the card…do I smell a new franchise? Best movie of 2013? Nope but definitely worth a rental.

Official Premise: Get ready for a twisted take on the classic tale as Hansel (Jeremy Renner) and Gretel (Gemma Arterton) have turned pro, coping with the trauma of their childhood captivity by slaying witches for hire. But when the seemingly unstoppable bounty hunters meet their match in an enemy so evil, it’ll take all their training, weapons and courage to survive. Revenge is sweeter than candy.

This release includes two cuts of the film. The original theatrical R-rated 87 minute cut and the extended unrated 97 minute cut.  The unrated cut is definitely worth checking out with more blood and gore…but it is only available in 2D.  I think that is the most disappointing part of this release is that the 3D Blu-ray only contains the theatrical cut, I would have liked to enjoy both in 3D.  I am sure it would haven’t have been much trouble to give us 3D cuts of both but nonetheless we got what we got.

Paramount delivers a fantastic three-disc combo pack including a 3D Blu-ray, standard 2D Blu-ray and DVD copy. Ultraviolet streaming digital copy, as well there is a iTunes digital copy. Like I said the 1080p transfer is very impressive and works very well with the 3D presentation.  2D fans will also appreciate this fine transfer as well. The Dolby TrueHD 5.1 audio track works perfectly with the action and score by Atli Örvarsson, who recently worked with Hans Zimmer to contribute music to the Zack Snyder’s “Man of Steel”.

As brainless fun as the film is, the special features are lacking in terms but still are decent. There are three short featurettes. The first is “Reinventing Hansel & Gretel”, which runs about 15 minutes.  It looks into the origin of the film and its production. “The Witching Hours” looks into the cool design process of the witches in the film.  Kudos again for great make-up. Lastly “Meet Edward the Troll” is another short look at creating the Troll in the film. So overall decent but nothing really substantial in terms of value. Of course if you can always count the unrated cut as a bonus feature but that is up to you. 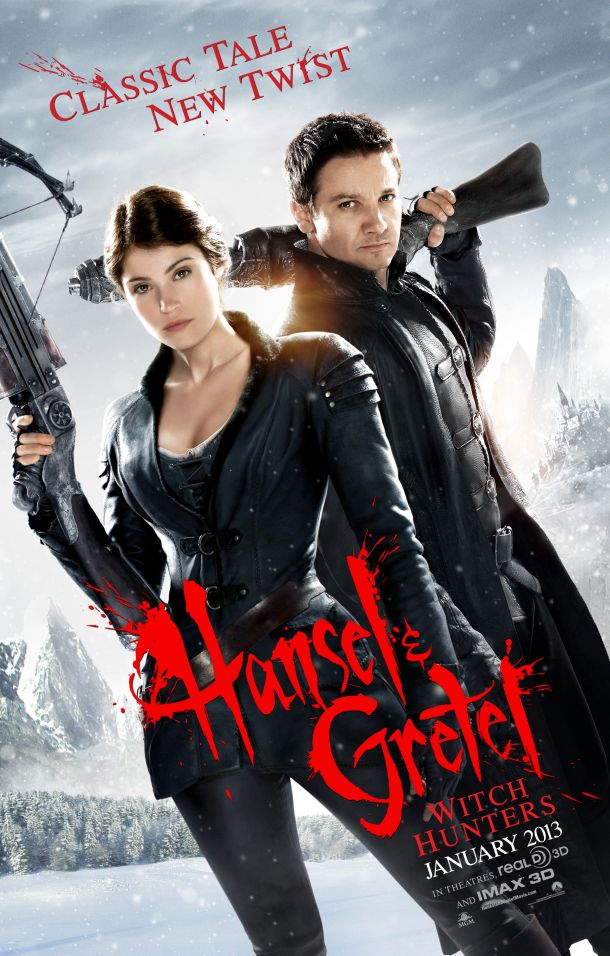 Of course, like me, you remember the story of Hansel and Gretel. Two kids lost in the forest find a house made of candy, go inside and eventually kill the witch that hoped to eat them. The End. Or so you thought. Apparently there’s a little bit more to the story.

Gorily rendered in pretty impressive 3-D, “Hansel and Gretel: Witch Hunters” gives the old fairy tale a pretty bold spin. Seems the tykes weren’t lost…they were abandoned in the woods by their dad, hoping to hide a family secret. Of course, after they got a taste of the excitement and celebrity that comes with shoving a witch in the over and burning her to death, the two grow up to become, to be blunt, bounty hunters. Their journeys take them to a small town where several children have turned up missing. Even the crudely drawn likenesses attached to milk bottles haven’t produced a clue. When H and G show up they come across a mob, led by the local sheriff (Stormare in, after last week’s “The Last Stand,” his second consecutive over the top performance) intent on burning a young woman (Pihla Viitala) accused of being a witch. Before someone can determine if she weighs the same as a duck (or is made of wood) Hansel steps in and declares her too beautiful to be a witch and she is set free. Later that night a group of non-professional witch hunters are attacked by Muriel (Famke Jensen), a kind of super-witch with some deep and dark plans for the missing children. But Hansel and Gretel have other plans. Let the carnage begin!

Full of exploding heads and set in that weird movie land where the people still ride horses, light their homes with candles and possess automatic weapons, “Hansel and Gretel: Witch Hunters” is best summed up in one word: Fun. At least that’s the way I took it. Both Renner and Arterton give tongue in cheek performances, which are always the best in films like this. Take these parts too seriously and you get hooted off the screen. Take them too casually and people want their money back. Here the laughs are earned, the effects are strong and both actors can be assured of working again.

Visually the film is well put together. The 3-D is utilized to its fullest potential and the special effects are well rendered. The script has some witty moments as well as a few holes. Due to having to eat so much candy as a child Hansel has apparently become the world’s first diabetic. He informs us that he needs to give himself a shot every couple of hours or he will die. Then he proceeds to go a couple days without it. Maybe he’s Type 2? On a positive side, I can see this movie spawning a great drinking game once it comes out on DVD – everyone takes a drink when they hear the word witch! See, I told you it was fun!

With “Hansel and Gretel: Witch Hunters” hitting theaters this month, here comes the low-budget DTV rip-off called “Hansel & Gretel​: Warriors of Witchcraft. The film is a dark modern day twist on this fairytale and aims to draws in the tweens and Twihard with casting Booboo Stewart of “The Twilight Saga” franchise and his sister Fivel Stewart. The film also co-stars Eric Roberts and Vanessa Angel, which just add more cheese to this already cheesy film. Unless you are a young girl, I would steer very clear from this.

Official Premise: Jonah and Ella Mazer (Hansel and Gretel) were happy, normal teenagers–sent to an elite boarding school. The Head Master, Sebastian, seems to know more about the brother and sister than they know about themselves. As both get to know their high school classmates, strange and frightening things begin to happen. When their new friends explain that they are all descended from powerful witches, and they’ve been waiting for Hansel and Gretel to join them and complete a new generation of the Coven, both refuse to believe them. But it’s not until Hansel discovers a message from his mother in an old leather-bound book of spells hidden in the school library, that he understands their true and dangerous destiny – slaying witches.

Some of the special effects look cool to be honest so it isn’t all bad. I was a little soft on my rating, since I had the priveldge of meeting and interviewing Mr. Booboo Stewart in person and he is really a super cool kid. I feel bad that he had to take on this role. The special features include an audio commentary track with the director David DeCoteau and the stars Booboo and Fivel Stewart. It is entertaining for the most part and Booboo and his sister Fivel seems like they are having fun together. Lastly there is a stills gallery including.

ALL PASSES HAVE BEEN DISTRIBUTED AND WINNER HAVE BEEN EMAILED

If you like your fairy tales with a little bit of action then do we have the movie for you.  Media Mikes has teamed up with MGM, MTV Films and Paramount Pictures to give you a chance to be among the first to see the new film “Hansel and Gretel:  Witch Hunters.”
If you would like to enter for a chance to win tickets to the following advance screening, please leave a comment below, telling us which of your favorite fairy tales would you like to see brought to the big screen. The first (50) people to comment will be given a code to obtain a pass for (2) via the GOFOBO site. Winners will be notified on or before Wednesday, January 23rd. ONLY ONE ENTRY PER PERSON PLEASE! OTHERWISE ALL ENTRIES WILL BE DISREGARDED. The winners will be will notified via email and will be instructed how to register for their passes. Good luck and hope to see if you at the screening! Screening information is as follows: