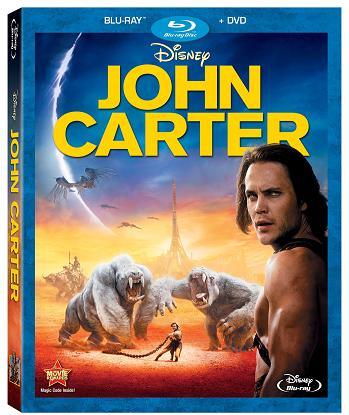 To celebrate the Blu-Ray™ release of “John Carter”, Media Mikes would like to giveaway 10 copies of the 2-Disc Combo Pack (Blu-ray™ + DVD). If you would like to win one of these great prizes, please leave us a comment below or send us an email and let us know your favorite sci-fi film. This giveaway will be open until Friday June 22nd at Noon, Eastern Time and is only open to residents of the United States. Only one entry per person, per household; all other entries will be considered invalid. Once the giveaway ends, Media Mikes will randomly pick out winners and alert the winners via email.

As a warrior lost on Earth, John Carter is magically transported to Mars, where the fate of the planet and its people ultimately rest in his hands. With surprising new powers, and epic battles, he rises to become the man he is meant to be and the hero he truly is.

2-Disc Combo Pack (Blu-ray + DVD) includes:
Blu-ray bonus features:
– Disney Second Screen – Explore John Carter’s journal with this innovative in-world experience and uncover a trove of fascinating details that extend the mythology of the movie.
– 360 Degrees of John Carter – Experience every aspect of the filmmaking process on one of the movie’s biggest production days.
– Deleted Scenes with Optional Commentary by Director, Andrew Stanton
– Barsoom Bloopers
DVD bonus features:
– 100 Years In The Making – Follow the journey of Edgar Rice Burroughs’ story, from its origins as a pulp novel to its arrival onscreen.
– Audio Commentary with Filmmakers