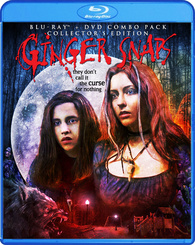 It is crazy to think that next year “Ginger Snaps” will be celebrating it’s 15th anniversary. I remember it came out when I was working at a video store and I remember purchasing it for the store after falling in love with it. I used to push it at every horror fan that walked in the store. The film features some great gore and pretty awesome visual effects and a refreshing original spin on the werewolf genre. It also introduced us to Emily Perkins and Katharine Isabelle, who has been recently taking off the horror genre with gems like “American Mary”. If you never happened to catch this film, now is the time to do it for sure and horror hounds, this is a must purchase.

Official Premise: Fifteen-year-old Brigitte Fitzgerald (Emily Perkins) and her nearly-sixteen-year-old sister Ginger (Katharine Isabelle) are both best friends and outcasts. Obsessed with dying and bound by a childhood pact to stay together forever, they loathe their mind-numbing existence in the suburbs of Bailey Downs. One night the two girls are heading through the woods when Ginger is savagely attacked by a wild creature. Ginger’s horrible wounds miraculously heal over, but something is not quite right about her. Ginger is irritable and in denial. But to Brigitte, it is obvious that a terrifying force has taken hold of her sister. She’s convinced that the insatiable craving her sister is experiencing can mean only one thing: Ginger is becoming something unspeakably evil and monstrous.

Shout! Factory is releasing this film as a combo pack with a Blu-ray and DVD. I would love to see them get into the HD Digital Copy world soon, since this is a film that I would love to have in my Ultraviolet account. There is a nice slipcase included as well as a reversible cover. The 1080p transfer looks fantastic from the gore to the transformation scenes. I really enjoyed it. Same goes with the DTS-HD Master Audio track. It really sounds great film’s music and score by Michael Shields.

The special features are a real winner and makes this release a must have for the extras alone. There are brand new interviews with director John Fawcett, writer Karen Walton, actors Emily Perkins and Jesse Moss, Producer Steve Hoban, Make-up Effects artist Paul Jones, Composer Mike Shields and Editor Brett Sullivan. If that isn’t enough new content, there is also a new panel discussion, “Women in Horror”. I really enjoyed this and any fan of the series, should definitely check it out.

There are two audio commentary tracks included. First with Director John Fawcett and also second with Writer Karen Walton. Those two also join together to give optional commentary on a few Deleted Scenes. There are three Vintage Featurette including “The Making of Ginger Snaps”, “Creation of the Beast” and “Being John Fawcett”. Lastly there are Cast Auditions and Rehearsals, Theatrical Trailers/TV Spots and a Production Design Artwork Photo Gallery included.

Actress and Producer DEEDEE BIGELOW is honored to be a part of “Ginger Stein: Rise of the Undead,”
the new Horror Sci-Fi Comic Book by artist Dennis Willman, Jeff Hughes of Comic Book Divas and Iron
Dead Studios. “Ginger Stein” is the story of an ordinary woman called upon to become extraordinary as the
world falls victim to a zombie apocalypse. The concept of “Ginger Stein” is really a simple love letter to
everything that makes the horror and sci-fi genres great, in particular the 1980’s. The story is largely inspired
in spirit by Romero’s “Dead” movies, “The Evil Dead” Trilogy and the “Phantasm” series of films.
Miss Bigelow will portray “Diana Diablo”, a sly and cunning woman that does not hesitate to turn on her enemies…and friends. She is definitely a character not to be under-estimated! Attached is the promo photo
of DeeDee as “Diana Diablo”, along with a behind-the-scenes photo!
A scipt for the feature film is also currently in developement.
Additional information about “Ginger Stein: Rise of the Undead” and this new exciting new horror comic
book can be found here: http://comicbookdivas.com/gingerstein/
“Ginger Stein” will premiere at the Rock and Shock Convention on Oct 14-16, 2011 in Worcester, MA.
While the premiere issue will be unveiled in MA, Miss Bigelow will be a Special Guest at the Memphis
Comic and Fantasy Convention on Oct 14-16, 2011 in Memphis, TN. She will have this amazing promo
photo for sale at the convention. Please see below for official show times!www.memphiscfc.com