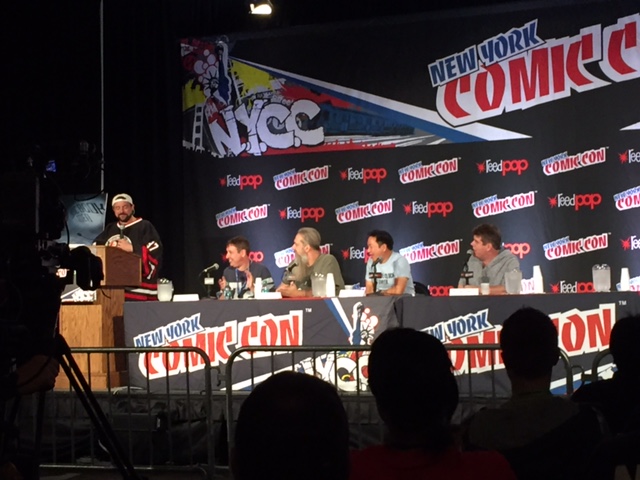 As the leaves begin to fall and Halloween decorations begin to go up it marks the change in season for most but for pop-culture fans it acts as the tell tale sign that New York Comic Con is just around the corner. The ginormous four day event which marked its 10 anniversary this year and once again acted as the culmination of the week long “Hero Week”. Fans of all walks of filed into the vast Jacob K. Javitz center where over the course of the events four days more than 160,000 fans would walk the halls of the center making it easily the largest convention on the East Coast

Thursday of the convention was once reserved for press and special ticket holders however in the last two years the day has been opened up for single ticket holders and pretty much anyone else who wanted to traverse the ever expanding crowd. In comparison to previous year’s attendance was definitely up as several panels we planned to cover couldn’t even accommodate press due to the at times overwhelming numbers. Thursday’s panel highlights included those by HBO’s “Game of Thrones”, Tru TV’s “Impractical Jokers” a special panel appearance by “Walking Dead” creator Robert Kirkman along with appearances by the cast of AMC’s “Comic Book Men” with the panel being moderated by none other than Kevin Smith. Even though the entire cast of the show was present a majority if not all of the questions were directed towards Smith. Over the course of the hour long discussion Smith detailed his ideas behind the creation of the show and his thoughts on the series success which will celebrate the start of its 5th season on Oct. 18th. Prior to the panel’s conclusion Smith announced that he will begin filming the long awaited sequel to his film “Mallrats”. The sequel which will begin shooting this winter in Pennsylvania centers on Brody played by Jason Lee attempting to save his beloved mall from terrorists. Shooting for the film will begin shortly after Christmas and casting for extras for the film will be announced via Facebook. Smith noted that this is the first of two movies he has planned to shoot in 2016 however he did not say what the other film would be. My hopes would be “Clerks 3” which Smith has said in previous panels he does plan to shoot. We are keeping our fingers crossed. 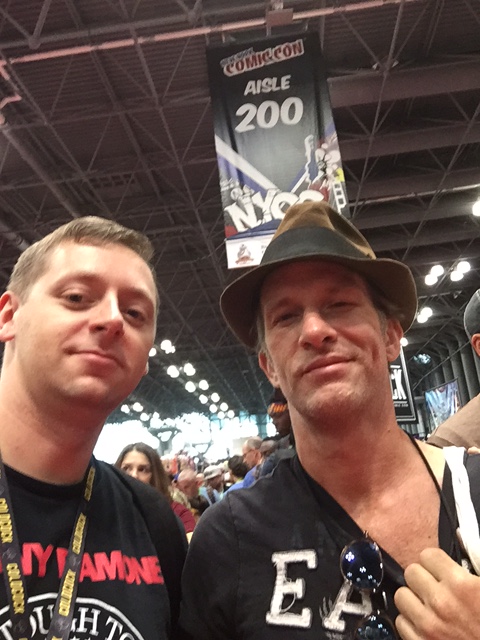 In between attempting to squeeze into the several desirable panels we wanted to cover we ventured to Artist Alley which is always a hot spot for those wanting to meet their favorite comic artists. Atop the rooms upper tier on this day was Seth Myers who had brought his set to the con and was interviewing attendees for a segment of his show “Late Night with Seth Myers”. This certainly added traffic to an already bustling room which showcased booths by some of today’s top artists including “Amazing Spider Man” artist Humberto Ramos, “Deadpool” writer Gerry Duggan, “Wonder Woman” artist David Finch and former Good Charlotte guitarist Billy Martin who is currently drawing for IDW’s “Teenage Mutant Ninja Turtles.

With time beginning to dwindle we made our way to the main convention floors which were packed not only with various vendors but every sort of cos-play character you could think of. We even managed to bump into a shoeless Thomas Jane who was attending the convention with his daughter. All the costumes and media personalities jamming the isles only added to the massive amounts of eye candy which were on display.

Everything from the latest in vinyl figures to endless amount of comic books both new and old was available for purchase or pre-order. Some of the bigger more impressive set ups included the always prevalent Midtown Comic’s and one by Pepsi who was on hand to promote the upcoming release of “Pepsi Perfect” the futuristic soda originally featured in the film “Back to the Future II”. The display was complete with sleek looking tables and counters which displayed the curvy bottles. To top it all off the display included its very own Delorian time machine flanked by none other than Marty and Doc Brown impersonators.

After an exhausting day of searching crowded aisles for numbered display booths, a thwarted attempt at getting a picture of the one and only Grumpy Cat and being shut out of several high profile panels we took account of all the positives we saw throughout the day despite the few negatives and made our way to the 7 train for our journey home. With final attendance be calculated at around 167,000 for the events four days it’s unsure if the Javitz Center will be able to handle the conventions continued growth. However with numbers which are rivaling San Diego Comic Con the future seems bright for the NY show and we couldn’t be happier to see it continue to grow.