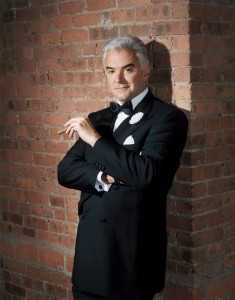 Television fans know John O’Hurley as the popular J. Peterman, Elaine’s boss, on the long running show “Seinfeld.” But it is performance on another show that helps bring him to Kansas City. As a contestant during the first season of ABC’s popular “Dancing with the Stars,” O’Hurley finished in second place, losing to Kelly Monaco, an actress whose show just HAPPENED to be on ABC. Fans of the show cried foul and demanded the two have a “dance-off,” with only the fans voting for the winner. In the rematch, O’Hurley and his partner, Charlotte Jorgensen, were declared the winners, raising over $125,000 for the charity Golfers against Cancer.

Since then, O’Hurley has split his time between the stage and screen. He played King Arthur in “Spamalot” during the show’s production in Las Vegas and has played shrewd lawyer Billy Flynn in “Chicago,” both on Broadway and on the road. Well known for his voice you can hear him in such cartoons as “Buzz Lightyear of Star Command,” “Duck Dodgers,” “Phineas and Ferb” and “Spongebob Squarepants.”

This week Mr. O’Hurley reprises his role of Billy Flynn in the touring production of “Chicago.” Before opening night he took time out to talk to me about the show and his career.

MS: If the Internet Broadway Database is to be believed you literally just walked off the stage of the Ambassador Theater in New York City, where you played Billy Flynn for the last six weeks, to travel here to take the part on the road.
JO: I closed on Broadway Sunday night. I had a great time there, especially during the holidays. 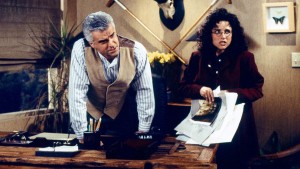 MS: Wow, when they say the road shows are “direct from Broadway” they’re not kidding.
JO: (laughs) Not at all. I think I still have the same socks on.

MS: You are, of course, best known for your work on “Seinfeld.” Was it your appearance on “Dancing with the Stars” that led to your work in musical theater?
JO: I’ve done King Arthur in “Spamalot” over 1000 times and, of course, Billy Flynn over 1500. I think a lot of my success came about because of that show. It gave me my name back. Prior to that I was known as J. Peterman. But after 2005 I was known as John O’Hurley.

MS: You do a lot of voice work. Do you have to prepare differently as an actor for a cartoon voice as opposed to a full live performance?
JO: Right now I’m involved in about fifteen cartoons…”Spongebob,” “Fineas and Ferb” and others…but it’s a lot of fun because I have an eight-year old son and it’s nice to be able to develop a body of work that 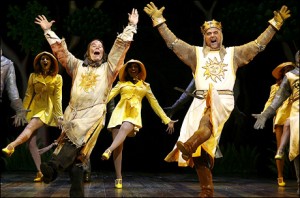 is somewhat successful to him. As far as preparing, not really. The roles are already larger than life. It’s a medium that’s very BIG. The characters are larger. Subtlety is not a part of animation.

MS: How long to you plan to stay on tour with “Chicago?”
JO: I started the tour late last year, in October and I’ll continue through the end of it, which is the end of March.

MS: Do you have anything else coming up?
JO: Yes, I have a new television series with Bryan Cranston from “Breaking Bad” that we’re working on now. We’ll be shooting later in the spring. I have a movie to do in Greece. And I’m hosting a dancing tour this summer, which will be sporadically through my vacation time. And I’m sure there will be another tour of “Chicago” next year.