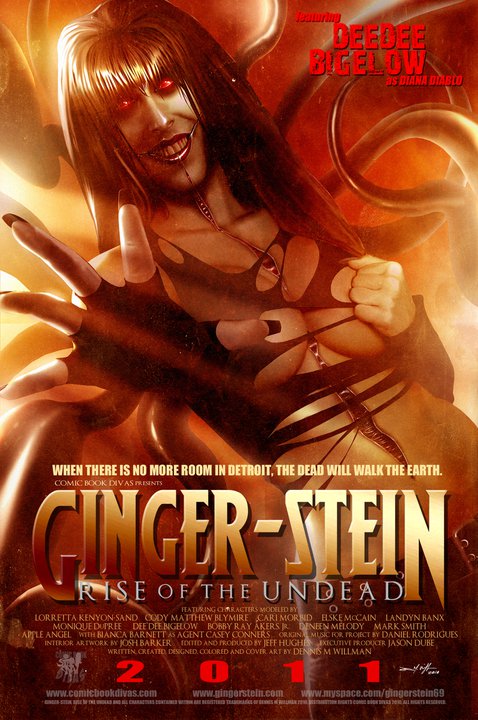 Actress and Producer DEEDEE BIGELOW is honored to be a part of “Ginger Stein: Rise of the Undead,”
the new Horror Sci-Fi Comic Book by artist Dennis Willman, Jeff Hughes of Comic Book Divas and Iron
Dead Studios. “Ginger Stein” is the story of an ordinary woman called upon to become extraordinary as the
world falls victim to a zombie apocalypse. The concept of “Ginger Stein” is really a simple love letter to
everything that makes the horror and sci-fi genres great, in particular the 1980’s. The story is largely inspired
in spirit by Romero’s “Dead” movies, “The Evil Dead” Trilogy and the “Phantasm” series of films.
Miss Bigelow will portray “Diana Diablo”, a sly and cunning woman that does not hesitate to turn on her enemies…and friends. She is definitely a character not to be under-estimated! Attached is the promo photo
of DeeDee as “Diana Diablo”, along with a behind-the-scenes photo!
A scipt for the feature film is also currently in developement.
Additional information about “Ginger Stein: Rise of the Undead” and this new exciting new horror comic
book can be found here: http://comicbookdivas.com/gingerstein/
“Ginger Stein” will premiere at the Rock and Shock Convention on Oct 14-16, 2011 in Worcester, MA.
While the premiere issue will be unveiled in MA, Miss Bigelow will be a Special Guest at the Memphis
Comic and Fantasy Convention on Oct 14-16, 2011 in Memphis, TN. She will have this amazing promo
photo for sale at the convention. Please see below for official show times!www.memphiscfc.com