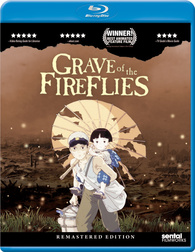 “Grave of the Fireflies” is based on the semi-autobiographical novel by Akiyuki Nosaka. Sentai Filmworks is the company behind this fantastic release.  They  know their anime and you know that a film/series is in good hands when they are handling it. This has been labeled is one of the top twelve anime of all time by Empire. It has always been a favorite of mine.  It is sweet, yet harsh and powerful.  It tells such a strong story and the animation is just amazing.  For this Blu-ray release, there is also a new English dub track included, but I am still partial to the original Japanese track. Nonetheless, if you are a fan of this film, I highly recommend this release.

Official Premise: As the Empire of the Sun crumbles upon itself and a rain of firebombs falls upon Japan, the final death march of a nation is echoed in millions of smaller tragedies. This is the story of Seita and his younger sister Setsuko, two children born at the wrong time, in the wrong place, and now cast adrift in a world that lacks not the care to shelter them, but simply the resources. Forced to fend for themselves in the aftermath of fires that swept entire cities from the face of the earth, their doomed struggle is both a tribute to the human spirit and the stuff of nightmares. Beautiful, yet at times brutal and horrifying.

This Blu-ray release has a superb 1080p transfer.  The animation really pops out and the colors look stunning.  The film is not extremely bright though due to its circumstances but it still has that “Wow factor”.  Whether you are a fan of the Japanese of English audio, they both have very sharp DTS-HD Master Audio 2.0 tracks.  Also included is the original English 2.0 track if you were a fan of that one from the DVD. Besides a stunning Blu-ray presentation, there is not a lot going on in the special features front though.  There is some cool storyboards for the film, as well as deleted scenes in storyboard format. Lastly, there is the Japanese theatrical trailer included.

“Fireflies in the Garden” is the type of film that really proves that an amazing impressive cast does not mean an amazing movie. The cast includes the amazing talents of Ryan Reynolds, Willem Dafoe, Emily Watson, Julia Roberts, Carrie-Anne Moss and Hayden Panettiere. Willem Dafoe easily gives the best performance out of the group by a long shot. This film has been in on the shelf for many years since it was filmed back in 2008, it is no surprise why either. In fact the film was completely re-cut recently prior to this release and I am scared to see what it was like prior to the that.

The film centers around an accident with Charles (Dafoe) and his wife Lisa (Roberts) as they are heading to a family reunion. From there I was completely lost with the film switching between past and present through flashbacks. When the family gets together during the funeral there lives become intertwined. Charles and his son Michael (Reynolds) try to work their difficult relationship…also told through flashbacks.

I did really enjoy the score of the film from Jane Antonia Cornish. It helps push this film a long during its short 89 minute running time that feels more like over 2 hours. The special features are almost non-existent. There is only a brief behind the scenes called “A Flash of Life: The Making of Fireflies in the Garden”. Watch it for the cast and Dafoe’s performance but otherwise it is worth taking a pass on.