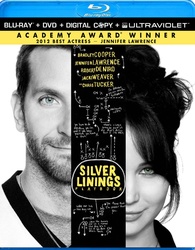 I am not a fan of sports films at all. When I first heard about this film, I thought that’s what it was but was I wrong. David O. Russell’s last film was “The Fighter” with Christian Bale and Mark Wahlberg, which I was not a fan of at all despite Bale’s amazing performance. So I was very hesitant seeing this film at first. I have to say after watch it one…twice…three times…it easily became one of my favorite films of last year. The performances in the film are absolutely stunning. I do not think I even spoke a word during my first viewing because I was blown away. When I think about Bradley Cooper, I do not think that he has this kind of a role in him but he was so amazing. Also before this film I was not a fan at all of Jennifer Lawrence, especially after the horrid “The Hunger Games” but she is now on my fav list. She was stunning in this film and really deserves the Academy Award that she won.

Besides the main two, the supporting cast is also amazing. Robert De Niro really gives one of his best performances in recent years. Probably one of the biggest surprises was from Chris Tucker, that’s right the say guy from “Rush Hour” series. He only had a small appearance but was very effective and memorable. David O. Russell does another wonderful job directing this film and adapting the script from the novel by Matthew Quick. He has this fantastic vision and really delivers it well to the screen. This film might seem like a light romantic comedy but it deals with some very heavy issues and at the drop of the hat just like the bipolar disorder it switches from genre to genre. That is why I absolutely loved this film it is very unpredictable and keeps you on your toes. If you haven’t seen this…don’t miss it.

Official Premise: Life doesn’t always go according to plan. Pat Solatano (Bradley Cooper) has lost everything — his house, his job, and his wife. He now finds himself living back with his mother (Jacki Weaver) and father (Robert DeNiro) after spending eight months is a state institution on a plea bargain. Pat is determined to rebuild his life, remain positive and reunite with his wife, despite the challenging circumstances of their separation. All Pat’s parents want is for him to get back on his feet-and to share their family’s obsession with the Philadelphia Eagles football team. When Pat meets Tiffany (Jennifer Lawrence), a mysterious girl with problems of her own, things get complicated. Tiffany offers to help Pat reconnect with his wife, but only if he’ll do something very important for her in return. As their deal plays out, an unexpected bond begins to form between them, and silver linings appear in both of their lives.

Starz / Anchor Bay delivered a very impressive combo pack release. We get both a Blu-ray and DVD disc copy of the film. There are also two digital copies including Ultraviolet and iTunes. I always prefer Ultraviolet, since it doesn’t take up space on your handheld devices and can be accessed anytime. The 1080p transfer is beautifully presented with an aspect ratio of 2.40:1. The cinematography in the film is so well-done including the handheld camera work, which I am usually not a fan of. The DTS-HD Master Audio 5.1 works very well with the snappy dialogue and the music, especially the big dance scene.

The special features are quite impressive on this Blu-ray release. There are nearly 30 minutes of deleted scenes included, which are quite impressive and a must watch for any fans of the film. “Silver Linings Playbook: The Film that Became a Movement” is a great feature on the production with interviews from cast and crew. “Q&A Highlights” are complied of various sessions with Russell, De Niro, Cooper, Lawrence and more. “Learn to Dance Like Pat and Tiffany” is a great ‘learn how’ feature with choreographer Mandy Moore on the moves seen in the film. The last two features are short but still fun. “Dance Rehearsal” has the duo showing us a few of their moves but runs under two minutes. Lastly, “Going Steadicam with Bradley Cooper” is a joke feature with Cooper taking the camera for less than a minute. Overall great extras, except the only let down is that there are no commentary tracks. I would have love to seen cast and crew giving their insight on the production.