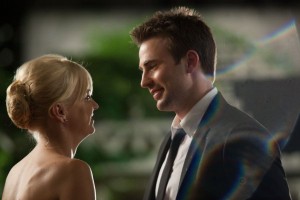 Since “Scary Movie” series, Anna Faris’ films really haven’t appealed to me, this one is no different. In fact I think it might be the worst one and she seems to spend a lot of time shows off her fake boobs. I am a fan of Chris Evans but it is sad that he is in this film the same year as the great “Captain America: The First Avenger”. But I guess for woman watching this film he walks around naked half the movie and I am sure they will enjoy it more. The film has terrible pacing and feels long after the first 30 minutes. The film does have some decent yet awkward  brief cameos from SNL’s Andy Samberg as a creepy puppeteer and Reno 911’s Thomas Lennon as a creepy gynecologist.

After losing her job, Ally (Anna Faris) reads a magazine article called “What’s Your Number?”, which tells the average number of people America sleeps with.  Ally realizes that her number is nearly double the average at 19.  She decides to track down her ex-boyfriends in hopes to find one to marry and to avoid going over 20 men that she has slept. Ally gets some help from her neighbor Colin (Chris Evans), who sleeps around, so guess what happens next while she tracks down her past exes.

The “ex-tended” unrated cut just adds 11 minutes to the already unbearable 106 minutes. Just to note there is also a DVD and digital copy of the movie included in case actually enjoyed it.  The special features on the disc are also lame, There are about 17 minutes of deleted scenes, nothing worth wild. The gag reel is decent and runs about 7 minutes and that is it on the features besides a trailer and some previews for upcoming Fox films. No audio commentaries or behind-the-scenes features, even though I wouldn’t watch them anyway.