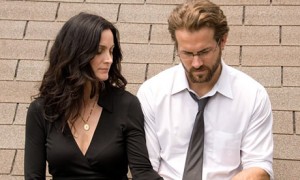 “Fireflies in the Garden” is the type of film that really proves that an amazing impressive cast does not mean an amazing movie. The cast includes the amazing talents of Ryan Reynolds, Willem Dafoe, Emily Watson, Julia Roberts, Carrie-Anne Moss and Hayden Panettiere. Willem Dafoe easily gives the best performance out of the group by a long shot. This film has been in on the shelf for many years since it was filmed back in 2008, it is no surprise why either. In fact the film was completely re-cut recently prior to this release and I am scared to see what it was like prior to the that.

The film centers around an accident with Charles (Dafoe) and his wife Lisa (Roberts) as they are heading to a family reunion. From there I was completely lost with the film switching between past and present through flashbacks. When the family gets together during the funeral there lives become intertwined. Charles and his son Michael (Reynolds) try to work their difficult relationship…also told through flashbacks.

I did really enjoy the score of the film from Jane Antonia Cornish. It helps push this film a long during its short 89 minute running time that feels more like over 2 hours. The special features are almost non-existent. There is only a brief behind the scenes called “A Flash of Life: The Making of Fireflies in the Garden”. Watch it for the cast and Dafoe’s performance but otherwise it is worth taking a pass on.