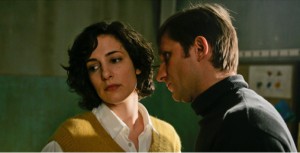 When you hear that Angelina Jolie is writing/directing a film, the first thing that pops into my head isn’t a foreign film. Well she did a really great job with “In the Land of Blood and Honey”, it is directed with a sharp eye and written very smartly. The content of the film is very intense consisting of rape and violence but she is still able to intertwine her romance into the story. I felt the film drags a little in the second half and gets a little confusing but overall I would say I enjoyed it.

The film is set in the in the 1990s during the Bosnian War. It locks conflicted romance of Danijel and Ajla, two people from different ethnic backgrounds. Danijel, a soldier fighting for the Serbs, and Ajla, a Bosnian held captive in his camp. Shortly before the war though the two knew each other and were one their way to possibly falling in love. As the war develops the their relationship gets more complicated as war drives them apart. 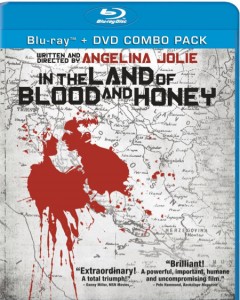 This combo back includes the Blu-ray and also a DVD of the film. The authentic language version is available on the BD with English subtitles, and the newer before released English language version is available on the DVD. If I had the option to watch it I would highly recommended the foreign language version. The Blu-ray presentation is superb. It looks great with its 1080p transfer, very sharp and very realistic. The DTS-HD Master Audio 5.1 track is also very impressive and works well with the war scenes and the film’s beautiful score.

The extras are decent but lacking commentary from Angelina Jolie. “The Making of In the Land of Blood and Honey” Featurette takes you behind-the-scenes through filming in two languages and the local cast reflections on the actual the war. There are a few deleted scenes also included. Lastly exclusively available on the Blu-ray version is a Q&A with Jolie and Actress Vanesa Glodjo. Definitely worth checking out to get more insight into the film.