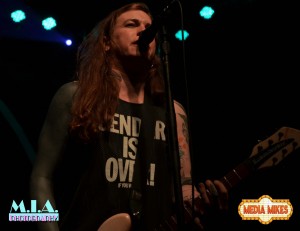 Against Me! made their way back to the quaint Town Ballroom located in Buffalo, NY as part of their ongoing Transgender Dysphoria tour. Along for the ride this time around were San Francisco, Bay Area native Annie Girl & the Flight and former My Chemical Romance guitarist Frank Iero and his band the Cellebration. Despite the show being mid-week the venue was near capacity with a crowd set to give their all.

Taking the stage first would be Annie Girl & the Flight. The bands sounds were a mix/match of styles ranging from experimental garage rock to modern folk. The group performed songs off their self titled debut as well as songs from their latest EP “Bodies. It was hard at times to figure out which direction the band would go in next however the uncertainty made for an interesting listening experience as the band showed off an impressive range that kept listeners on their toes.

Former My Chemical Romance guitarist Frank Iero would be up next with his group “Frank Iero & the Cellebration”. As the band took the stage they were greeted with tremendous applause and instantly launched in to their 30+ minute set which was made up of songs from the groups “Stomachaches” album was high energy from the word go. The band took little time in between songs packing as much music as they could into their brief set which acted as the catalyst that upped the night’s energy.

Against Me! would close out the night with an impressive set of 20+ songs that band blasted through in rapid fire succession. Front woman Laura Jane Grace commanded the microphone like a true professional and really shined on songs such as “Black Me Out”, “Thrash Unreal” and “FuckMyLife666”. Another stand out of the nights set was the bands rendition of The Replacements song “Androgynous” which Laura and drummer Atom Willard performed a few months ago with Miley Cyrus and Joan Jett for Cyrus’s Happy Hippie Foundation. Despite front woman Grace appearing a bit tired (no doubt from her relentless tour cycle) the band sounded killer as always which made for a really great night of music.

If you for some reason or another have yet to catch an Against Me! show over the past year or so then what are you waiting for? There are still plenty of opportunities as the band will continue to tour the States through July before heading to Europe where they will be through August only to come back for another round of shows in the U.S. which run through September. 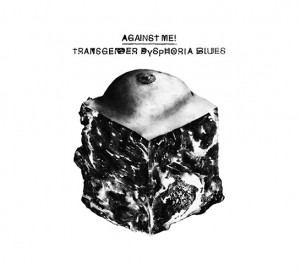 The punk rock group Against Me! made a stop at Rochester, NY’s Water Street Music Hall on Saturday, May 10th in support of their latest album titled “Transgender Dysphoria Blues”. The 4 piece group appeared to be in top form with singer/guitarist Laura Jane Grace at the helm as the group blasted through an hour and fifteen minute set that included songs from the group new album and their sizable back catalog.

Big Eyes a three piece power trio from Seattle, Washington helped kick off the night as they performed a solid 35 minute set playing songs that were a blend of both classic and indie rock. Singer/guitarist Kate Eldridge laid down an impressive performance both on guitar and vocally while the group’s bassist and drummer provided an extremely tight back beat. Next up was the group Tony Molina from San Francisco, California. The group performed a unique blend of melodic punk rock tinged with Black Sabbath like break downs that quickly grabbed my attention. Sadly the rest of the crowd in attendance didn’t seem interested as there were several portions of the bands brief set which could have used immediate attention mainly in the name of feedback suppression which ran ramped in between each number.

After an extended set change Against Me! would take the stage opening with “FuckMyLife666” which set the performance of perfectly by paving the way for songs like “New Wave”, “Don’t Lose Touch” and “Trans Gender Dysphoria Blues”. The bands energy was high throughout the fast pace 75 minute set and though the band paused only briefly to interact with the frenzied crowd those in attendance didn’t mind. At point during the set the band asked the crowd for help as they sang happy birthday to bassist Inge Johansson which everyone seem to really enjoy and then it was immediately back to the set which was closed out shortly after by the song “The Ocean” from the bands “New Wave” album. After some persistent chanting from the crowd Laura Jane returned to the stage for a solo performance of “Baby, I’m an Anarchist” which was followed by full band performances of We “Laugh at Danger (And Break All the Rules)” and the always entertaining “Pints of Guinness Make You Strong”.

Whether you just discovered Against Me! or you are a long time fan you need to get to one of the remaining shows on this tour. The band sounds better than ever and the new material sounds even better live. Also if you want to check out some other cool music then get to the venue early and catch both Big Eyes and Tony Molina sets as I don’t think you will be disappointed.

“Transgender Dysphoria Blues” is the 6th and latest release from punk rock veterans Against Me! Produced and written by front woman Laura Jane Grace the album features 10 brand new tracks which are a careful mixture of 90’s punk/indie rock. “Transgender Dysphoria Blues” clocks in at just under 30 minutes and is being released independently via the bands own label Total Treble Music.

For those unfamiliar with the events leading up to the release of this album do yourself a favor and find a copy of the May, 12th 2012 issue of Rolling Stone. Not only will that article catch you up to speed but it will also shed some light on the album’s title and several of the songs found on the record. If you already know singer Laura Jane Grace’s (formerly Tom Gabel) story then listening to the songs on “Transgender Dysphoria Blues” will certainly hit on a number of emotions while giving you a look into something a lot of us might not understand. The album plays as if you are listening to someone reading a diary filled with entries of struggle, confusion and sadness.

Tracks like “Transgender Dysphoria Blues” and “True Trans Soul Rebel” contain the bands signature punk driven sound while the lyrics give us a glimpse inside the tumultuous thoughts of Laura Jane pre-transformation. “Drinking with the Jocks” is an in your face tale of trying to fit in with what society deems as acceptable or “normal”. Though a good portion of the albums subject matter revolves around Laura Jane’s experiences songs such as “Osama bin Laden as the Crucified Christ” and the albums closing track, one of my favorites “Black Me Out” are filled with political references and insight that range from subtle to full on blatant.

Along with this being the first album to feature Laura Jane Grace it also is the first to feature the bands new drummer former Rocket from the Crypt drummer Atom Willard. Though the lineup and the look of the band has certainly changed since they first burst on the scene in 1997 the new version of Against Me! Is stronger than ever and “Transgender Dysphoria Blues” does a pretty good job at reaffirming that.