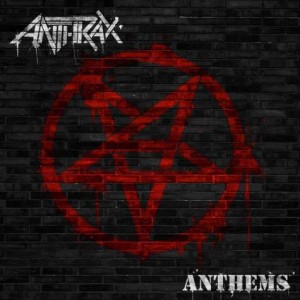 For months we have been hearing rumblings of an Anthrax EP consisting of various classic rock staples and on March 19th the wait will finally be over. “Anthems” produced by Jay Ruston and Rob Caggiano features 6 classic rock covers and 2 versions of the song “Crawl” which first appeared on the bands Grammy nominated album “Worship Music”. Though the songs chosen to appear on the release might not be the biggest hits from the original artist’s catalog’s fans of both groups will surely appreciate the edgy renditions that are fresh while still staying true to the original versions.

Being a fan of cover songs/albums I have been keeping tabs on this release since speaking with Anthrax lead singer Joey Belladonna at this summer’s Mayhem Festival. Though he couldn’t give me too many details at the time I was quite pleased with what I heard on “Anthems”. Probably my favorite track off the EP is the song “Big Eyes” which was originally written and recorded by Cheap Trick. The haunting choruses instantly grab you and before you know it your singing along and pounding your fist. I also enjoyed the remix of “Crawl” which features a more orchestral arrangement making the song sound very robust. The other songs contained on the release are not to be discredited as they all feature very strong performances and production however they seem to be common staples that a lot bands cover so I probably could have done without hearing another version of AC/DC’s “TNT”.

If you’re a diehard Anthrax fan or just a fan of the originals and looking for a fresh spin on some great songs do yourself a favor and grab the digital version of the release or for the more traditional music listeners head to the store and pick up a hard copy of the EP which will feature one of 6 “re-imagined” album covers created by Anthrax drummer Charlie Benante and artist Stephen Thompson.