“Downton Abbey: Season 4” is with not question one of the most anticipated show this year. The show already completed its airing in the UK but in the US it just started airing on January 5th. This season picks up around six months after the tragic end to the Series 3 Christmas Special. This Blu-ray includes the original U.K. unedited edition of the show and contain all of Season 4, including the finale. This show returns with the acclaimed ensemble cast led by Hugh Bonneville, Elizabeth McGovern, Michelle Dockery, and Maggie Smith, as well as guest stars Shirley MacLaine and Paul Giamatti. This season is the most epic yet for sure. A must own for any fan!

Official Premise: Six months after Matthew’s tragic death, his loss is still felt throughout Downton Abbey. Mary struggles to face a new future with her fatherless child, and is encouraged by the family to pick up the pieces. With the twenties in full swing and the tides of change sweeping through Downton, Rose’s continued attraction to the bright lights of London spells trouble for the Crawleys, and Edith’s budding relationship with Michael Gregson is threatened by events beyond her control. Meanwhile, below stairs, passions run high and young hearts look set to be broken.

“Downton Abbey: Season 4” Blu-ray release looks amazing. Watching this show on PBS (in “high def”) doesn’t even come close to this. The locations where this show is shot look so amazing. I love the estate’s grounds look sharp and majestic as they should be. The DTS-HD Master Audio 2.0 track for each episode also sounds amazing. It works well with the show’s intense and (English) dialogue and the show’s beautiful score. In terms of special features, there is not a lot but what is included is a must watch. You get to go behind the scenes and witness the making of Season 4 with more than 30 minutes of bonus footage! “Downton Abbey” already is scheduled to return for a fifth series in September 2014 (in the UK). So stay tuned! 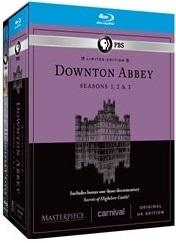 I have to admit, I have never watched “Downton Abbey” prior to hearing of this new release. I know that series four just started airing in the UK and the hype is all around. Created by Academy Award-winner Julian Fellowes (“Gosford Park”) and features a quite outstanding cast. I wanted to give this show a shot since literally everyone is talking about it. In the US, after the airing of the third series it has become the highest-rated PBS drama of all time. PBS is releasing “Downton Abbey: Seasons 1, 2 & 3” as a limited edition box set which includes all three seasons of the series, as well as a bonus documentary, “Secrets of Highclere Castle. This series is quite amazing, just a marvel to look at. So well acted and so well scripted. I am now hooked and can’t wait to see what lies in for series four.

Official Premise: “Downton Abbey” tells the story of a complicated community. The house has been home to the Crawley family for many generations, but it is also where their servants live, and plan, and dream, and they are as fiercely jealous of their rank as anyone. Some of them are loyal to the family and committed to Downton as a way of life, others are moving through, on the look out for betterment or love or just adventure. The difference is that they know so many of the secrets of the family, while the family know so few of theirs. But for all the passions that rage beneath the surface, this is a secure world, serene and ordered, and, at first glance, it seems it will last forever. Little do they know, family or staff, that the clouds of the conflict that will change everything are already gathering over their heads.

Just a note if you are a really hardcore “Downton Abbey” fan, I would suggest getting this from Amazon since it includes an additional over 50 minutes of exclusive footage not available anywhere else. There are never-before-seen deleted scenes from Seasons 1-3, all-new cast interviews, and 11 minutes of clips and interviews from Season 4! So that would be the way to go and easily worth the purchase of the release alone. The episodes look and sound great on Blu-ray, a real improvement over the presentation on PBS. The 1080p transfer looks amazing and really captures the beauty of the gorgeous Highclere Castle. The DTS-HD Master Audio 2.0 also delivers a great presentation, especially with the score from composer John Lunn. The score works so well with the show, which also made me immediately download the CD.

The rest of the bonus features includes are also available on the previously released Blu-rays. Season 1 consists of “Making of Downton Abbey – A House in History” and “Great British Heritage Pass, a promotional spot for British tourism”. Season 2 consists of the “Downton Abbey Christmas Special”  and the following three featurettes “Fashion and Uniforms”, “Romance in a Time of War” and “House to Hospital”. Season 3 delivers the best extras of the three with the powerful Season 3 Finale: “A Journey to the Highlands”, “Downton Abbey Behind the Drama”, “Shirley MacLaine at Downton “, “The Men of Downton” and “Downton in 1920”. All three seasons add up to more than three hours of bonus content. Lastly the bonus disc: “Secrets of Highclere Castle” includes the one-hour documentary, which takes us the castle featured in Downton Abbey and gives a unique look behind-the-scenes on this show.