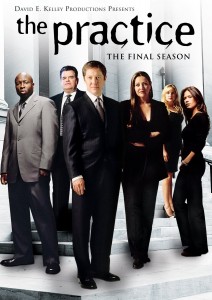 I have to admit, I had never seen David E. Kelley’s Emmy® Award-winning legal drama but I was a HUGE fan of “Boston Legal”, which was this shows spin-off. This eighth and final season of “The Practice” was really awesome and perfectly set up the pass for the equally critically acclaimed spin-off, “Boston Legal”. I am never usually a big fan of law shows but David E. Kelley really knows how to deliver a powerful show.

This season introduced us to not only the debut of Alan Shore, but early appearances from Tara Wilson (Rhona Mitra), Catherine Piper (Betty White), Sally Heep (Lake Bell)… and the legendary attorney Denny Crane (William Shatner). The Alan Shore/Denny Crane relationship was something that can never be recreated on TV. Absolute thing of beauty. This final season of “The Practice” is a must-own for fans of “Boston Legal”.

Official Premise: Major upheavals have left Ellenor (Camryn Manheim), Eugene (Steve Harris) and Jimmy (Michael Badalucco) in charge of the firm. In an attempt to rebuild their ranks, Ellenor hires an old friend: the enigmatic and ethically-challenged Alan Shore (James Spader). Shore’s brilliant-yet-highly-unorthodox methods succeed in winning big cases — but will they also threaten the future of the firm?

I know this show has never received a Blu-ray release but I would have loved to see this season get that treatment. Just like I have been holding out buying the complete series of “Boston Legal” until they get released on Blu-ray. There are no additional special features on this release besides the 22 episodes. I would have loved to had some commentary tracks included on these episodes from the cast/crew.