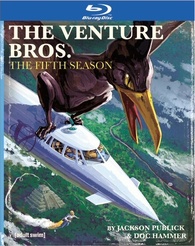 When I saw the beginning of the fourth season of “The Venture Bros”, I was really disappointed to see the replacement of Brock Samson. I love the rest of the characters but he was really 75% of the reason why I watched the show. Sergeant Hattred (voiced by co-creator Jackson Publick aka Christopher McCulloch) is a decent character but Samson’s shoes are a bit too big to fill. This season was actually an improvement over four, it picks up right from season four and is pretty funny and action-packed. But I think the huge gaps between seasons has caused myself to loose interest overall in this show. Fans of the show who still love it should rejoice since there is a sixth season which should be airing late 2014-early 2015.

Official Premise: The fifth season of The Venture Bros. picks up moments after the stunning climax of season four and hits the ground running for a season of globe-trotting adventures and stay-at-home suspense. But no matter where it runs?from the steamy jungles of Central America, to the sparkling sands of the Greek Islands, to the seedy back alleys of Tangier, to the jagged cliffs of By-Golly Gulch?the Venture family can¹t escape the treachery of enemies old, new, and within.

What the “The Venture Bros” has never lacked is quality voice talent. This season get packed with tons of great guest voices including Aziz Ansari, Paget Brewster, Wyatt Cenac, Kevin Conroy, Bill Hader, John Hodgman, Gillian Jacobs, Kate McKinnon, Tim Meadows, J.K. Simmons, and Brendon Small. In terms of the episodes, the fourth season contained fifteen thirty-minute episodes and a one hour-long season finale but this season was amped up to an hour long premiere episode and seven thirty-minute episodes. I still think this show works better as an fifteen minute show much like “Metalocalype”.

This Blu-ray contains the eight episodes from its fifth season PLUS two bonus episodes “A Very Venture Halloween” and From the Ladle to the Grave: The Shallow Gravy Story”. The animation looks solid with the show’s 1080p transfer. Also included is an HD Digital Ultraviolet copy of the season as well. In terms of special features, there some deleted scenes and episode commentaries from series creator Jackson Publick and fellow writer, director and executive producer Doc Hammer. The commentary tracks are a nice touch to give the episodes some replay value as the duo are quite interesting together.