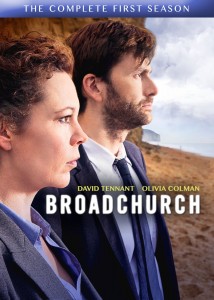 David Tennant can honestly do no wrong. He won us all over in his portrayal of the the 10th Doctor in the BBC hit revival series of “Doctor Who”. His latest series “Broadchurch” introduces us to Detective Inspector Alec Hardy, another role in which he nails. The show is a serial drama/thriller which centres on the death of an eleven-year-old boy, and the search for his killer. Just in the first season this show netted very high ratings and much critical acclaim. I really enjoyed this show and I am glad to see it finally get a US release. I wish Entertainment One could have given it a Blu-ray like in the UK personally. If you love David Tennant (who doesn’t), then I highly recommend this series.

Official Premise: Two detectives – the strong yet compassionate Detective Sergeant, Ellie Miller, and the by-the-book Detective Inspector, Alec Hardy – are brought together to solve the murder of an eleven year-old boy on a picturesque beach in a small coastal town. Under the glare of the media spotlight, the two race to find the killer, while the clock ticks and the mystery deepens.

Fun fact, Tennant’s co-star in this show Olivia Colman plays Detective Sergeant Ellie Miller. She also appeared in episode 5.1 of “Doctor Who” called “The Eleventh Hour” but missed Tennant’s reign by one episode. “Broadchurch: The Complete First Season” comes as a three-disc set contain all eight episodes. In terms of special features there is a making of featurette “Broadchurch: Behind the Scenes” and a few Deleted Scenes included. I would have loved to see some commentary tracks on these episodes which were originally included in the UK Blu-ray release.

Well “Broadchurch” fans, reassured since series 2 of this show is in currently development. If you don’t believe me watch the last episdoe of this season and you will see that “Broadchurch Will Return”. But wait there is more. Fox is also producing a US remake of “Broadchurch” to air in the 2014–15 season, called “Gracepoint”…and wait for it…David Tennant is playing the lead (again) detective named Emmett Carver. So it is going to be a broad future for this show. Keep it coming!