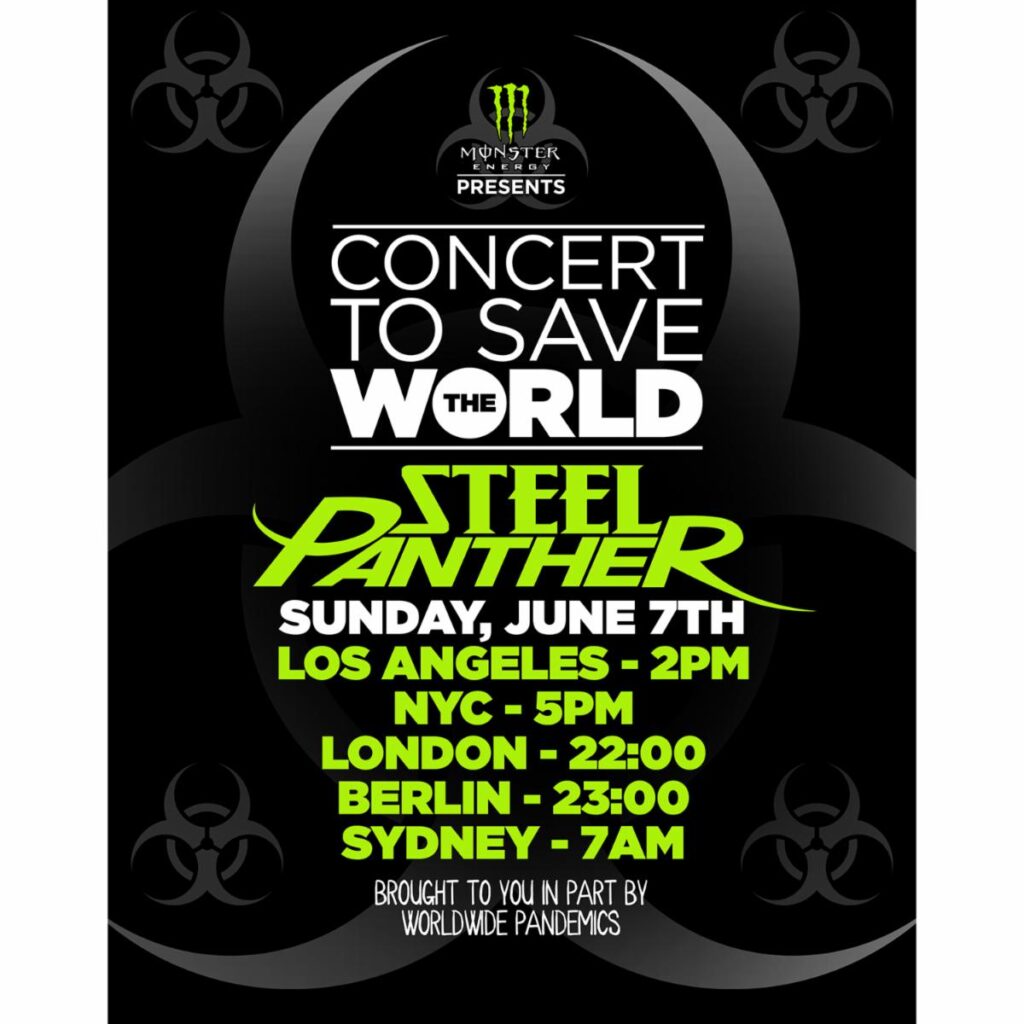 California rock legends and global philanthropists Steel Panther are gearing up for another first in their long and distinguished career. The band is going to be playing their first ever, completely live around the globe, socially distance abiding (band members will be 6’ away from each other too), virtual concert that they are calling the Concert To Save The World. The concert will take place on Sunday, June 7thfrom a sanitized, undisclosed location in Los Angeles that will feature full stage production and use multiple cameras to stream the event live on www.steelpantherrocks.com.

The show will be live at 2:00PM Los Angeles time, 5:00PM New York City time, 10:00PM (22:00) London time, 11:00PM (23:00) Berlin time, 5:00AM (Monday morning) Hong Kong time and 7:00AM (Monday morning) Sydney time. The band will take breaks during the show and interact with the fans live around the globe. Tickets for the virtual concert will cost $15.00 each with proceeds from each ticket sold going to benefit Heavenly Pets Animal Rescue (the location that hosted the band’s recently announced All Day Kitty Cam) and Live Nation’s Crew Nation Fund (benefitting all touring personnel affected by the Covid-19 pandemic).

Any fan who has purchased the band’s latest effect pedal The Butthole Burner prior to the concert will get a free ticket to the event. The band will also be giving away 3 pedals live during the event as well as a guitar, merchandise from longtime sponsor Monster Energy including a year’s supply of Monster, a Jambox, skateboard and other items. The Concert To Save The World is being sponsored by Monster Energy and tickets are available here: https://lnk.to/steelpantherlive.

“This concert is guaranteed to, at the very least, have our microphones plugged in and facing the right direction.,” explains Steel Panther. “We feel like heavy metal hasn’t been represented in any recent broadcasts. It is time to bring spandex and hairspray back to the forefront and ripping guitar solos into your living rooms. Additionally, Steel Panther would like to inform you that it is totally legal to attend this concert naked!”

Steel Panther has been making headlines with their daily video vignettes helping folks sheltering-in-place know what day of the week it is. A short musical intro gives way to a band member explaining which day it is for their viewers. The series has gained such popularity that various entertainment friends have made cameos as well. Comedy legend George Lopez recorded a special video for Cinco de Mayo and joins a list that includes Corey Taylor of Slipknot/Stone Sour, Scott Ian of Anthrax, Jason Hook of Five Finger Death Punch, and Joey Fatone of ‘N Sync with more surprises forthcoming. The videos can be seen on all social media platforms.

The band also recently released a music video for their newest single “Let’s Get High Tonight” from their chart-topping album Heavy Metal Rules (https://lnk.to/HeavyMetalRules). The Frankie Nasso directed video puts the heavy metal heroes in various musical styles including a black metal band, a Spanish mariachi band, a boy band, a Baroque classical quartet, and a country/western band. That video can be seen here: https://youtu.be/_l6sbhjm8pk.

ABOUT STEEL PANTHER:  For the uninitiated, Steel Panther was formed in 2000 and is comprised of Michael Starr (lead singer), Satchel (guitarist), Lexxi Foxx (bass) and Stix Zadinia (drums). Hailing from Los Angeles, the epicenter for rock n’ roll in all its debauchery and glamour, Steel Panther has established themselves as the world’s premier party band, melding hard rock virtuosity with parody and criminally good looks. Steel Panther is a global phenomenon with four full-length albums, touring across the world, platinum-level You Tube status and high-profile television appearances such as Jimmy Kimmel Live, Larry King Now, and FOX NFL Sunday.  Rolling Stone avowed, “There’s a reason Steel Panther have transcended their origins as a cover band playing the Sunset Strip,” while Metal Sucks declared, Steel Panther’s concept is genius…their songwriting is…preposterously snappy – and relatable.”

Tagsylvania in Big Flats, NY returns for its 7th season

The ghoulish residents who reside in the mysterious fog covering the sprawling grounds of Tag’s in Big Flats, NY came alive for their 7th fright filled season on Friday September 23rd.
Included in Haunted Attraction Magazines top 31 must see haunts Tagsylvania is bigger and better than ever for the 2016 scaring season. Along with the haunts staple attractions “Jerkus Circus” an over the top nightmare inducing 3-D journey through a circus gone terribly wrong, “Lecter’s Lair” a multi floor adventure which put you face to face with some of your deepest and darkest fears and “Psycho Swamp” a twisting and turning maze which holds you captive by your creepy surroundings.

Along with several upgrades to the haunts existing attractions is the newest member of the family “Escape the Precinct”. You and the members of your group are wrongfully accused of multiple murders and are being detained for questioning. In the Precinct are the items you will need to collect to prove your innocence and possibly reveal the actual person who committed the murders. You have 60 minutes to uncover the clues, solve the puzzles and collect enough evidence to gain your freedom. If one of these terrifying adventures isn’t for you haunt manager Jesse Reib says Tagsylvania has plenty of other things to offer including carnival games, concessions, psychic and tarot card readings along with a few other surprises that will keep you on your toes during your visit to Tagsylvania.

Tagsylvania is open at 7pm on Friday’s and Saturdays starting September 23rd and runs through October 29th. 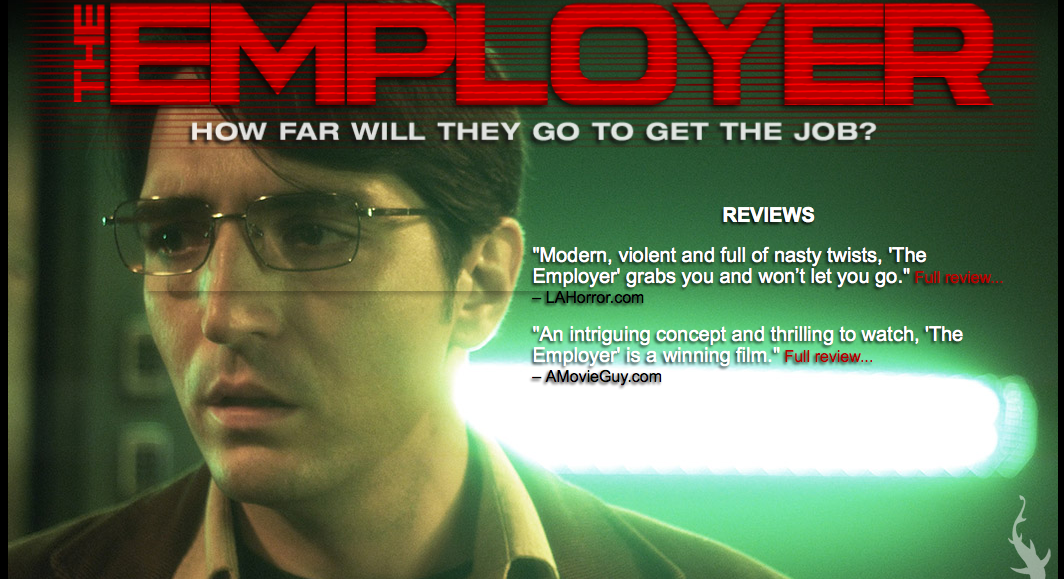 Director / Writer / Producer Frank Merle (“Carnage, Chaos & Creeps,” “Gnaw” ) and his new psychological thriller “The Employer” show just how-far five applicants are willing to go for a job at the mysterious Carcharias Corporation. Anticipating their final interview, they find themselves trapped in a room where The Employer (Malcolm McDowell) leaves them with only one choice: survive. It’s kill or be killed in this Darwinian game of wits and the one who makes it out alive… lands the job. The plot is complete with twists and turns leaving the audience asking themselves, “How far would I go?”