Tagsylvania in Big Flats, NY returns for its 7th season

The ghoulish residents who reside in the mysterious fog covering the sprawling grounds of Tag’s in Big Flats, NY came alive for their 7th fright filled season on Friday September 23rd.
Included in Haunted Attraction Magazines top 31 must see haunts Tagsylvania is bigger and better than ever for the 2016 scaring season. Along with the haunts staple attractions “Jerkus Circus” an over the top nightmare inducing 3-D journey through a circus gone terribly wrong, “Lecter’s Lair” a multi floor adventure which put you face to face with some of your deepest and darkest fears and “Psycho Swamp” a twisting and turning maze which holds you captive by your creepy surroundings. 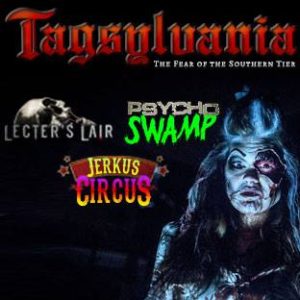 Along with several upgrades to the haunts existing attractions is the newest member of the family “Escape the Precinct”. You and the members of your group are wrongfully accused of multiple murders and are being detained for questioning. In the Precinct are the items you will need to collect to prove your innocence and possibly reveal the actual person who committed the murders. You have 60 minutes to uncover the clues, solve the puzzles and collect enough evidence to gain your freedom. If one of these terrifying adventures isn’t for you haunt manager Jesse Reib says Tagsylvania has plenty of other things to offer including carnival games, concessions, psychic and tarot card readings along with a few other surprises that will keep you on your toes during your visit to Tagsylvania.

Tagsylvania is open at 7pm on Friday’s and Saturdays starting September 23rd and runs through October 29th.