The Paradiso experience begins, if you choose to provide your smartphone number, before you reach the venue with some ominous video messages ‘exposing’ the Virgil corporation who you are due to meet at your appointed time. Everyone in my party also received different clues to help us but to keep secret from each other. 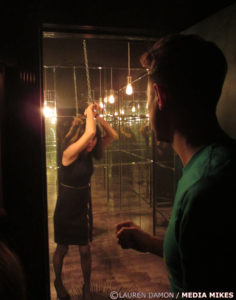 In midtown we met up with our contact in a functioning karaoke bar to begin our experience. Ostensibly we are being welcomed into the offices of the Virgil Corporation who are on the lookout for genetically gifted escape artists. A wonderfully spacey secretary doled out forms and waivers in Virgil’s reception before the “normal” procedures were quickly overridden and the ‘real’ escape experience begins. Cue the Saw-ready voice changer demands from the heavens. Suddenly the office was revealed to be full of puzzles and my team sprang into action.

Chapter 1 features four more spaces after that reception office, each offering their own distinct look. For my money, the best room was a vintage library where we encountered a frantic handcuffed woman who upped the tension and hastily armed my teammate with a pistol. Other thrills included an air duct for us to feel extra John McClane-y and a massive bomb to be disarmed complete with digital countdown clock. The actors, handcuff lady included, make for an extra level of intrigue as they can help or hinder your progress and to this day none of my team can decide on if we allied ourselves correctly. 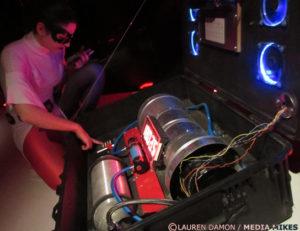 visual clues to math and physical puzzles. If you’ve ever fantasized who would be in your Oceans-type heist amongst friends, that’s the crew to bring. And going into this Halloween weekend, Paradiso provides an excellent alternate to conventional horror houses by getting your heart-racing without scaring you silly. Ultimately my escape team was done in by some algebra in the final room–who knew that would come in handy?!–but we eagerly look forward to many more chapters to come.

View the Paradiso trailer below, and find ticketing information at its official website.