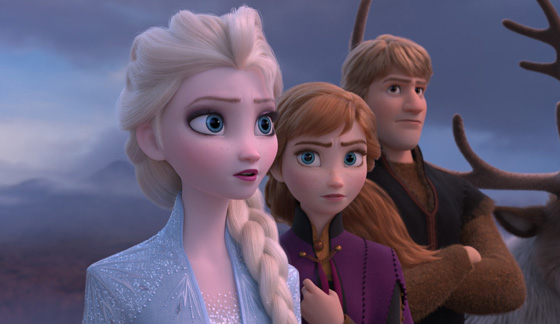 Call me Nostradamus.  In 2015, in a book I published, I commented on the proliferation of sequels in today’s Hollywood.  I also noted that, as the original “Frozen” was such a big hit, you can rest assured there will be a “Frozen II.”  And now there is.  And it’s pretty darn good.

The film begins with a flashback of the two young princesses being told the story of how their kingdom was founded by their father.  It’s not a pretty tale and their mother calms them down with a lullaby.  Jump to the present.  We join our Princesses (Anna – voiced by Ms. Bell and Elsa – voiced by the Marvelous Ms. Menzel) as they enjoy a nice day outside with their snowman pal Olaf (Gad).  Apparently Olaf has been “permafrosted” so the sun no longer bothers him.  The story takes a turn when Elsa vanishes, having left to discover the secret behind her power (for the uninformed, she has the ability to conjure up snow and ice at will).  Adventure, and several songs, ensue.

“Frozen II” sticks to the Disney tradition of the sequel – familiar characters doing different things.  The story (and songs) aren’t as strong as the original, but it is enjoyable.  I may be unfair in doing this comparison, but the songs here are not as strong as in the first film.  “Let It Go” was a powerhouse of a song, deservedly earning the Academy Award for Best Original Song.  The best number here is “Into the Unknown,” which is delivered in full throat by Ms. Menzel.  As someone who would pay to hear Idina Menzel sing the phone book, her range and power on this tune is breathtaking.  Great for me, but it kind of takes the wind out of the sails of the other numbers.  The cast is in great form (and voice), with both Bell and Menzel giving life to their characters while Josh Gad is at his best comic timing as Olaf.

Visually, the film is perfect.  When I think back to the hand-drawn animation of my youth I can’t believe the progression that has been made up until today.  Directors Buck and Lee, who took home the Oscar for “Frozen,” return and keep the story moving, always a good thing when your target audience is youngsters.  They have delivered an early holiday present to princesses’ everywhere.