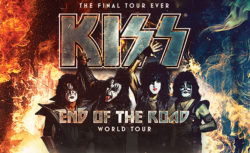 Rock and Roll Hall of Famers Kiss brought their bombastic “End of the Road” tour to the lake side St. Joseph’s Health Amphitheater in Syracuse, NY on August 27th to perform to a near capacity crowd for what very well could have been the last time due to the band announcing earlier in the year that this would be their final tour. With the annual NYS Fair taking place in the background there was already plenty of excitement in the air which the band surely was set to capitalize on.

As the scenic amphitheater quickly began to fill up renowned performance painter David Garibaldi would take the stage to showcase his unique style of splash painting back by remixed version of notable rock tracks which coincided with his subject. Garibaldi painted 3 works including one of Jimi Hendrix and of course one of Kiss complete with the shows location. A painter certainly is not the most traditional of opening acts (a fact which had a lot of concert goers scratching their heads) but given Paul Stanley’s foray into painting over the last few years there was I guess some logic to it. With the giant black and silver Kiss curtain already in place it was only a matter of minutes before it would be dropped making way for the hottest band in the land. As the opening notes of “Detroit Rock City” blasted through the PA the band descended from the roof on brightly lit platforms flanked by numerous backing displays which adorned the entire stage. The veteran rockers wasted no time launching into their catalog as they ripped through classics such as “Shout It Out Loud” and “Deuce” before breaking things up with a newer track “Say Yeah” from the groups 2009 release “Sonic Boom”.

As the evening progressed fans were treated to everything they have come to love about make-up clad band including plenty of fire, explosions, and over the top stage theatrics which included a trip in to the audience via an elaborate flying rig by Paul Stanley for the songs “Love Gun” and “I Was Made For Loving You”. After a brief exit from the stage following the closing notes of “Black Diamond” drummer Eric Singer would reappear for his version of “Beth” which he performed sitting behind a sparkle/mirror encrusted piano. Following the closing of the ballad the full band would return for two more songs including “Rock ‘N’ Roll All Nite” which featured plenty of red and white confetti that in a matter of seconds had nearly the entire crowd covered while they sang along to probably Kiss’s most well know song.

If this truly is the last time we will see Kiss then the show the band put on for Syracuse, NY was a fitting send off as the band hardly missed a beat. Of course it would have been great to see the band perform with original members Ace Frehley and Peter Criss as well as non-makeup era guitarist Bruce Kulick but sadly that just wasn’t in the cards for this tour. With these three former members not being present for this tour could that possibly leave the door open for future Kiss works? Maybe,  and as we have learned from the bands past you just never know however, if the band does stay true to their word then you owe it to yourself to make it to one of these shows as no other band is out there putting on a show of this magnitude especially one with 40 plus years of history.