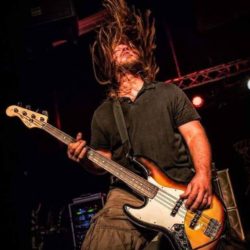 New York based heavy metal group Damn Your Eyes have just released a brand new 10 track album titled “Kill The Outside”. The band which consists of former We Are The Enemy and Bonesmith members along with current Black Water Rising bassist Oddie McLaughlin have come together to forge a new musical path which draws deeply from the each of the members own personal experiences. Media Mikes had the chance to speak with Oddie recently about the creation of the new album, its deep personal meaning and what it like balancing duties between two bands.

Adam Lawton: Can you tell us about some of the work that went in to the new album “Kill The Outside”?

Oddie McLaughlin: Artie (Alexander) and I have played together off and on since we were first out of high school. We were always writing or learning different material. We recorded I think five songs with this drummer about fifteen years ago and then went our separate ways. Two of those songs from that period we kept. Basically it was just the riffs as there was no melody or vocal lines. That’s really where everything started. I got a call on day asking if I would be interested in starting something new and I said yes so shortly after we started writing songs for this release. When I got together with Artie after talking he already had few songs laid out including the two riffs we originally worked on. He had added some new ideas and things just started rolling. The writing for this album has been amazing and things have come together fairly easy. The songs all fell together nicely. Once we got our singer Kenny (Vincent Jr.) things moved even quicker. It’s just been a great process.

AL: The songs all seem very personal. Were the lyrics pulled from members past experiences?

OM: Oh yeah. Most of it is from Artie and some of it is from the other guys. They pulled from their experiences in the music business to how the world is going today. We expressed our emotions related to some of those events along with a bunch of other things. It’s definitely a record that deals with what is going on around us and personally.

AL: Do you ever find it hard to dig in to some of those emotions?

OM: No. We feel that if we put this stuff out there that it might help someone. Someone might see that they aren’t the only one feeling a certain way. I think it’s a great avenue to get it across to people especially metal fans.

AL: Along with personal lyrics the album also features a variety of musical styles. Was this something the band did consciously or was it something that occurred more naturally?

OM: I think it was something that happened organically. All the guys in the band like different styles of music but at heart we are total metal heads. We like a certain tone which has come from each of us evolving our sounds over the years. We all spent time on our own to craft just the right tone to get to where we are now. That’s what we are in to. The genre of music comes naturally for as we like to chug it out in order for that melody to come with a groove chorus or a main verse riff. We all have been doing this for some time now and we have a solid process which allows for the creation of material to occur fairly easily.

AL: What are the bands plans to tour in support of the album?

OM: We all work regular jobs and a couple of us have kids so planning a tour can be a little tricky. We are always willing and ready to get out there but for now have just a few shows set up to help things get going. I think this is a great band with great songs. I feel that no matter where we play we will go over well and we hope to be able to play as many shows as possible. Playing live is what we absolutely love. Practice, Recording and all that stuff is great but nothing beats performing live on stage.

AL: You also play in Black Water Rising. How do you go about splitting time between the two groups?

OM: It can be tough sometimes balancing two bands and your own personal life. You have to be really careful with scheduling in order not to double book yourself. Just last month this happened where I played with both bands in one night. I played an early show with Damn Your Eyes in Long Island and then had to drive to New Jersey for a show with Black Water Rising. I made it in plenty of time and something like that doesn’t happen often. When you’re booking you have to do things so far in advance that you forget and things get piled up.