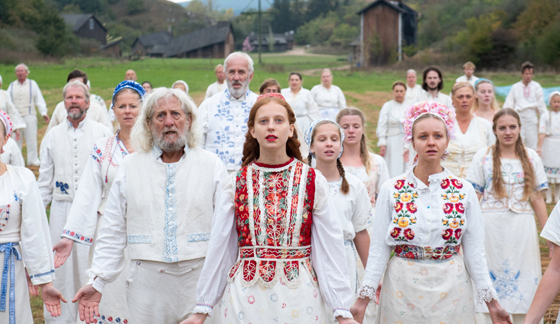 I don’t use superlatives a lot in my reviews, but I think it’s fitting this time because “Midsommar” has one of the most unsettling and gripping openings to a horror film I’ve ever seen. The movie begins on a snowy night in the states with Dani (Pugh), frantically trying to get a hold of her parents after a trouble set of texts from her bipolar sister stating that the darkness is too much, along with remarks about their parents. Compounding the issue is Dani’s boyfriend, Christian (Reynor), who seems disinterested in her concern about her sister, and why her parents aren’t picking up their phone. In fact, we find out, he’s at the bar getting drunk with friends, mulling over a potential break-up with Dani, instead of showing a single shred of worry. Christian is about to pull the trigger on their nearly four year long relationship when he gets a phone call from Dani. As soon as he answers, we hear the most horrifying cries of agony. Dani learns that her sister has taken her own life, and the lives of their parents, via carbon monoxide poisoning.

Cutting ahead to the summer, their relationship is still strained, Christian is still distant, and Dani is still dealing with grief. Escapism, for both, comes in the form of Pelle (Vilhelm Blomgren), one of Christian’s Swedish friends. Pelle is inviting Christian and their mutual friends, Josh (Harper) and Mark (William Poulter) to Pelle’s small village of Halsingland. They’ll be privy to a true once in a lifetime event, a festival that’s only held once every 90 years. Despite this village’s knowledge of the outside world and how advanced we’ve become, the people of Halsingland hold on to some incredibly archaic, brutal and terrifying beliefs that’ll slowly unfold over the course of a few days.

Unlike Director Ari Aster’s last film, “Hereditary,” nearly all of “Midsommar” is in the bright light of day, as the rural village sits nearly at the top of Scandinavia, so the sun, if ever this of year, doesn’t ever set below the horizon for the time that our characters are there. So much of the film’s horror doesn’t even happen in the cloak of darkness. The terror of the unknown, the secrets that this village holds, what their plans are, and what’s behind every closed door, happens in the optimistic shine of daylight. If anything, the moments in the dark are a part of a dream-like sequence or in the midst of a heavy dusk when the characters are lurking about the village, when they shouldn’t be.

The Americans in this movie should know better since the village is one constant red flag after another, but the slow boil of the plot plays into Aster’s hands as he’s given enough time to establish why each character remains there despite the overwhelming amount of evidence that says, “Run.” Josh is an anthropology student, looking to do his dissertation on the little researched village of Halsingland, shrugging off morbid rituals as cultural differences. Mark is a stereotypical horndog, thinking a lot more with his second, believing that a European excursion will get him high and laid. He’s half right. Dani seems aimless and lost in the world after the death of her entire family at the beginning, still pondering how she could ever move forward. Meanwhile, her boyfriend, Christian, whose seemingly non-commital to everything, is genuinely indifferent to danger. In fact, having any sense of self-preservation in these kinds of movies gets you killed first. Two ancillary characters, who were also invited to the village by Swedish friend from England, are the first to sound the alarm, but they soon disappear.

Maybe it’s because I watched “Hereditary” and knew that Aster loved sprinkling his movie with copious amounts of breadcrumbs, but I didn’t find myself completely shocked about the things that eventually transpired, nor was I shocked by the various, gruesome revelations that stacked on top of one another. That being said, I’m sure there are dozens of breadcrumbs that I missed because Aster is meticulous. Nothing seen in this film is incidental or by accident, it all serves a purpose towards the film’s numerous themes and subject matter. As to what this movie is about, that’s a lot to unpack. I’m certain that a movie as thematically open-ended as this is sure to leave a different, long lasting impact on viewers. That might mean that there is inherently no wrong way to interpret this, but only Aster is privy to how to correctly take it all in.

Since Aster had made this film deeply personal, “Midsommar” is most certainly a contemplation of death, literally and figuratively. One could muse that Dani seems unable to let her relationship with Christian die. Even though she mentions to a friend at the beginning of the movie that she suspects Christian is ready to dump her. She seems indecisive about confronting him, while sub-consciously knowing that it should come to an end. Even as they both walk like zombies through their relationship, Dani shows another layer to this toxicity, a fear. Despite taking a leap by going to a strange country, strange village and take part in their strange customs, she holds on to this belief that letting go of what’s she become accustomed to is the end, when it’s not. It’s odd finding that nugget of commonality in humanity amongst the gore and paganism. As for Christian, the movie does a fantastic job making the audience care less and less about what happens to him, showing over and over again that he’s emotionally detached from his friends and the world because he’s inherently selfish. Dani pines for a sense of unity, while Christian views people as a means to an end. In that regard, their individual fates are fitting.

It’s hard not to compare “Midsommar” and “Hereditary,” even though they’re drastically different in several categories. For example, “Hereditary” was a horror grounded in Satanism and the paranormal, whereas “Midsommar” is horror grounded in heathen ideology and violent ceremonies, without the use of supernatural forces. However both require a great deal of effort by its cast to read and act out these bizarro scenes with the utmost, straightest of faces. It’s hard to spot a flaw in any of the performances, with Pugh being the standout here as her character deals with so much emotional turmoil. One standout bit of acting by her is the opening scene where she mourns. In my line of work, I’ve had to edit clips of mothers at the scene of a homicide, sobbing loudly through the most tragic of griefs as they find out that their child is dead. Pugh captures that bone chilling wail flawlessly and it should cut into anyone.

“Midsommar” is an unsettling nightmare, showing unflinching carnage, all while smiling back at you. Aster’s sophomore effort will certainly be criticized by the mainstream audiences for being heartlessly malicious, crass, and boring, as evidenced by the handful of people that walked out of my screening at the first sign of violence in the film. I, like others, will be endlessly picking it apart in my mind, discussing it with others who’ve watched it and reading the insurmountable online articles by cinephiles attempting to do the same. I have yet to say a negative thing about this movie, which would usually necessitate a higher rating than the one I’m giving it, but this is an instance, much like “Climax” from earlier this year, where a second viewing would help me solidify my opinion on this film, and whether or not I’d rank it higher. My only hesitancy with “Midsommar” is its rewatchability, mainly because I didn’t find “Hereditary” as enjoyable the second time, nor would I ever want to watch it again. Like some high-concept films, enough time has to pass for a viewer to rewatch, analyze and appreciate during a second time, as opposed to a Hollywood blockbuster. I’m also fully aware that’s a critical cop out my end. However, “Midsommar” may be that, once every few years, trip to the museum, where you need a healthy amount of time to mull over and appreciate the art for what it is.