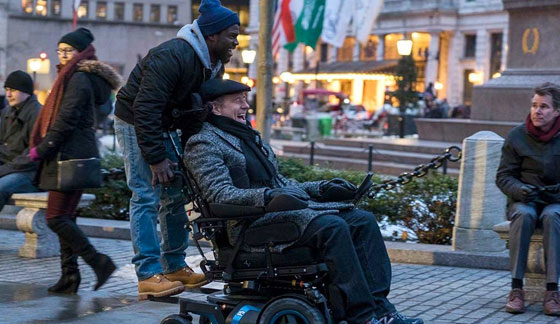 I’m going to start right out and say that, when he first burst upon the movie scene, I found Kevin Hart to be no more than an even louder Chris Tucker.  He could be funny but he could also be annoying.  In 2016 I began to come around, impressed as I was with his performance opposite Dwayne Johnson in “Central Intelligence.”  This week, with his new film, “The Upside,” he may have finally won me over.

“The Upside” is the story of two very different men who learn to rely on each other.  Hart is Dell, a recently released convict trying to right by his son but not wanting to put the effort into what it takes.  Cranston is Philip, a once very active billionaire who is now a quadriplegic, confined to a wheelchair.  Dell tells his parole officer that he’s looking for work, but to prove it he needs to have paperwork signed by three prospective employers or it’s back to the hoosegow for him.  He accidentally wanders into an interview session where Philip is speaking to prospective care-givers.  Intrigued by Dell’s “I don’t have time, just sign this” attitude, he offers him the job.  And a heartfelt and funny adventure begins.

For those who aren’t aware, “The Upside” is a true story and is based on the 2011 French film “The Intouchables.”  It is a story of how people can change, whether they want to or not.  Dell finds himself going from the projects to the penthouse (literally), while Philip, who has been slowly withdrawing since the death of his wife, begins to discover the joys of living again.  Both actors give solid, moving performances, with just enough laughter to keep the story moving.  As Philip’s business assistant, Kidman is no-nonsense in her dealings with Dell, likening his position to a baseball game – three strikes and he’s out.

Director Burger keeps the story flowing nicely, hitting all of the right emotional notes.  A fine way to enter the new year!