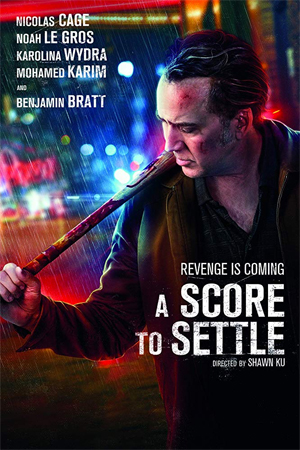 Not many people know this, but Nicolas Cage made his film debut 37 years ago in the comedy “Fast Times at Ridgemont High.”  He was one of Sean Penn’s stoner pals (along with fellow up and coming actors Eric Stoltz and Anthony Edwards).  He was also billed with his real name, Nicolas Coppola.  I didn’t really pay attention to him until the next year’s film “Valley Girl.”  There was something about him that struck me as interesting.  His career highlights include winning the Oscar for Best Actor in “Leaving Las Vegas” and such action hits as “The Rock” and “Con Air.”  I should also add that, when he was in Baltimore making the film “Guarding Tess” that he often ate at the restaurant my roommate worked at.  I was told he was very nice to talk to and a great tipper!

He hasn’t been in a lot of high profile films lately, but no matter what the film, he’s usually the best thing in it.  He certainly is in the new drama “A Score to Settle.”

Frank (Cage) has been looking forward to this day.  After 19 years he is being released from prison, where he was sentenced for a brutal murder.  On his way out he is informed by the prison doctor that he must do something for his insomnia or risk a life of hallucinations and, eventually, death.  But all Frank wants to do is spend some time with his son, Joey (Le Gros), hoping he can make up the time he lost with him.  Oh, and he also plans to take his revenge out on the people who put him in prison.

An entertaining and well-paced film, “A Score to Settle” is Nicolas Cage at his best – deeply intense with a little bit of crazy mixed in for good measure.  Carrying a duffel bag full of cash, as well as a bunch of prison-made baseball bats, Frank is trying to ease the guilt he feels from not being there for Joey, especially after his wife dies.  However, a fancy hotel, new clothes and even a new car are not what Joey wants.  Complicating things are Frank’s relationship with his former partner in crime, Q (Bratt) and his meeting of a female escort (Karolina Wydra) with her own problems.  As the film progresses it takes a twist that amps up the emotional impact of Frank’s mission.

A well recommended action/thriller, “A Score to Settle” is currently available with Video on Demand.