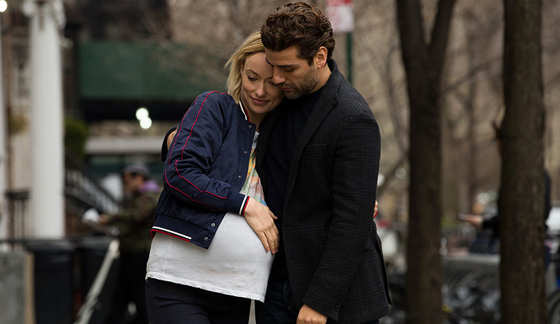 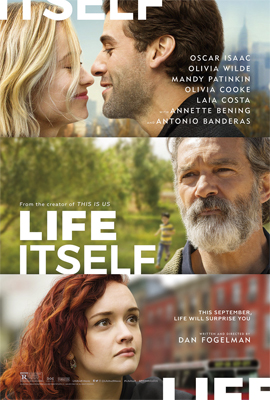 If only all movies could begin like “Life Itself.”  A single camera shot but one that is narrated by Samuel L. Jackson in all his glory!  You can’t help but laugh during the first five minutes of this film.  Which is a good thing, because you’re probably going to be crying for the other113 minutes!

We meet Will (Isaac) and Abby (Wilde) in the middle of what seems to be an incredible relationship.  Living happily together with their dog (a dog with the greatest name ever used in film), it seems like their life together will be perfect for all time.  That is until fate steps in.

A well written but slowly paced film, the “Life Itself” poster tells us the movie is written and directed by the man who created the popular television show “This is Us.”  I haven’t watched it but my wife does religiously and, judging from the amount of Kleenex she goes through each week, I assume it’s a weep-fest.  This movie certainly is.  The film jumps around in time, showing the audience how Will and Abby met, their life together and their all too soon separation.  In between the vignettes you get to spend time with Will’s parents, played by Jean Smart and Mandy Patinkin.  It is their relationship with their granddaughter that makes up the second act of the film.  Act three is the longest – and the most drawn out.  It deals with characters who are peripheral to other two stories, though we are not at first sure how.  It takes place in Spain, where a wealthy land owner (Banderas) falls in love with the wife of one of his workers.  The various extended scenes not only begin to drag, they are delivered in Spanish, which means it’s going to be a long night reading subtitles!

As I mentioned, the film is well written.  I can see why it found itself on the 2016 list of the best unmade screenplays in Hollywood.  There are a few laughs, among them Isaac comparing the vocal stylings of Bob Dylan to the co-pilot of the Millennium Falcon. Of course it’s even funnier to laugh if you know that Isaac is also a recurring character in the “Star Wars” film series.  And the rest of the cast are equally endearing.  The ending comes across as a little too far-fetched but still pretty well thought out.  But be warned, make sure you bring your Kleenex with you, because “Life Itself” makes “Manchester by the Sea” look like the second coming of “Airplane!”