Thirty years ago, I wanted to kill a fellow editor at my college newspaper because he went missing the night before the semester’s final edition was due at the printer. When I woke him the next morning, I became even more enraged because he and decided to catch a concert without telling me or my peers, and it was Poison.   Had he abdicated his responsibility for Todd Rundgren, Pink Floyd, The Rolling Stones or The Smiths, I might have excused him. But no, it had to be that silly hair band whose songs about partying were relatively easy to play. 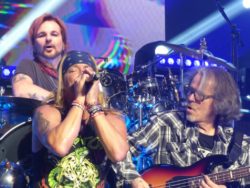 Another friend who had seen them play, lamented their musical limitations by dubbing guitarist C.C. DeVille “C.C. Distortion” for his sloppy solos, and an another buddy laughed when he saw concert footage of them on MTV and observed they were playing beginners’ instruments. Because my own musical chops are stunted, I’m not sure what was so embryonic about what axes Poison used to play. Nonetheless, we both felt smug as we continued to watch them perform on television. 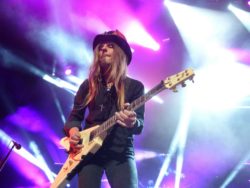 After finally seeing the band play for myself on May 25 at the Sprint Center in Kansas City, I think I can now easily forgive the other editor. Of course, we still made our deadline. I can also say I don’t envy him because the performance I caught might have been better than the one he saw. Now that their hair has grayed (where it still remains), the band has actually developed some skill and showmanship that wasn’t in their old videos.

Lead vocalist Bret Michaels constantly thanked the crowd and rattled off other area venues where he played with the band or as a solo act. It’s always nice when the band knows they’re on the Missouri side of the state line and can recall something about your town other than a stage.

Cheap Trick, who played before them, one-upped the headliners by claiming they had written a recent tune after eating at Gates Barbecue, a blue collar eatery when the clerks greet you as loudly as if they were playing the Sprint Center.  Unlike the musicians, the clerks don’t need microphones.

Michaels and the rest of Poison gave the crowd high fives throughout the set and genuinely seemed to enjoy being in the barbecue capital of the world. The band have had personnel changes and breakups, but the original lineup were all performing that evening. The set seemed oddly touching when Michaels briefly mentioned that drummer Rikki Rockett had survived cancer. 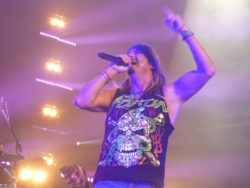 Both he and bassist Bobby Dall looked healthy and enthusiastic, so it was a jolt to hear that Rockett, who regularly tosses his drumsticks in the air and twirls them between beats, almost didn’t make it to the stage.

Because I was attempting to photograph the show from a pit at the bottom of the stage, I almost felt sorry for people in the back of the arena who couldn’t see what he was doing. When he later played an extended toward the end of the set, it made Michaels’ revelation all the more touching.

Michaels, who had a series of frightening health problems of his own in 2010, is also lucky to be alive. Perhaps that’s why their enthusiasm seems genuine. Playing in front of a house that can hold 19,000 people sure beats lying in a hospital bed or worse.

While Poison can play their old hits like “Every Rose Has Its Thorn” or “Talk Dirty to Me” with more technical assurance than they used to, they do little more than plow through their old catalog.

They did supplement their set with a large video screen that featured cartoons of the band before they took the stage. Their cover of Loggins and Messina’s “Your Momma Don’t Dance” proved to be a great excuse to feature the late pinup queen Bettie Page shimmying as they played. With Bettie just about any band would sound as good as the Stones on their best day.

Following a typically lively set by Cheap Trick requires a masochism few bands have. The three original members are all in their sixties and still have their old skills. Whereas DeVille impressed the crowd by mimicking Eddie Van Halen’s finger tapping and slipping in a bit of Edvard Grieg’s “In the Hall of the Mountain King,” Cheap Trick’s Rick Nielsen switched genres, playing styles and even guitars. The 69-year-old ax-man didn’t need a featured solo break because just about every song gave him a workout. 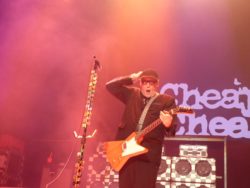 Oh, and while he was playing tunes like “Dream Police,” he was also tossing out picks at the crowd. Somehow his poses, witty asides to the crowd and acts of violence involving small pieces of plastic, never caused him to skip a note or detract from a solo. How he managed to hit me in the pit with a pick and get through the set at the same time baffles me.

Dall treated the crowd to his own version of Henry Mancini’s theme to The Pink Panther, but Cheap Trick bassist Tom Peterson gave his 12-string instrument a thorough workout and even sang a powerful medley of The Velvet Underground’s “Waiting for the Man” and “Heroin.” Nielsen complemented Peterson’s work with some tasteful slide solos, which lead vocalist Robin Zander accompanied with his own acoustic 12 string.

Zander happily took a break because during the rest of the set he still pushed his voice to its limit. Thankfully that limit seems superhuman. If his throat cracked a couple of times, he can still effortlessly reach high notes and make 40 to 30 year old songs sound fresh and committed. 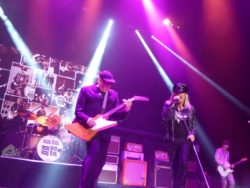 If you’ve caught Cheap Trick in the past or have listed to At Budokan to the point where you’ve memorized all the words, their current shows are still worth catching. Daxx Nielsen, Rick’s son, has ably replaced Bun E. Carlos on drums, and Zander’s son Robin Taylor fleshes out the band’s harmonies and played most of the rhythm guitar parts.

Thanks to That 70s Show, the band have a few songs (like their version of Big Star’s “In the Street”) that are more recent than anything Poison played, and the samples from their newer albums Bang, Zoom, Crazy… Hello (2016) and We’re All Right! (2017) fit seamlessly in with their hits. Radio stations may ignore their most recent offerings, and it’s the broadcasters’ loss.

They also surprised the crowd by featuring the Melvins, who joined them for a rousing version of “Surrender.” Drummer Hayley Cramer from opening band Pop Evil even joined the bands as they gave the 40 year old chestnut all they had.

As lead singer Leigh Kakaty kept reminding the audience, Pop Evil from North Muskegon, Michigan, have been around for a decade. While Kakaty lamented the empty seats on the floor (that were filled when the headliners arrived), and the rest of the ensemble still approached their set with vigor and enthusiasm.

He opined that the newer generation should learn, “There is a difference between a Gibson guitar and a motherfucking Apple computer.” Fortunately, he and his crew of analog performers and the bands that followed made an eloquent case for that argument.

The tour heads to Pryor, Oklahoma for their next gig.  For more information and other tour dates, click HERE.

POP EVIL and POISON’s SET LISTS WERE NOT AVAILABLE