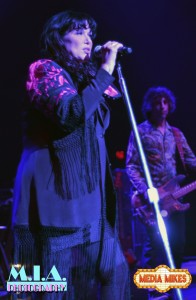 2013 Rock and Roll Hall of Fame inductees Heart made a stop at the Crouse Hinds Theater in Syracuse, NY on June 30th as part of the groups 2015 Music=Love tour. The group fronted by sisters Ann and Nancy Wilson performed a stellar 90 minute set which featured songs from the groups 40+ year career. The near capacity crowd instantly took to their feet with the band opening number “Magic Man” which instantly set the tone for the evening’s performance. As the set progressed both Ann and Nancy took turns at the mic introducing the numbers and giving some background on some of the more personal songs.

Songs such as “What About Love”, “Straight On” and “Barracuda” all received 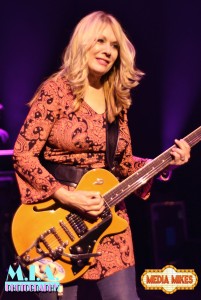 tremendous praise however it was songs like “59 Crunch” and a cover of The Sonics song “The Witch” where you saw the band really stretch its legs and get down and dirty. The band performed relatively flawless throughout the initial 15 song set after which they left the stage briefly only to return and treat the appreciative crowd to a 3 song encore consisting of “Immigrant Song”, “No Quarter” and “Misty Mountain Top” all Led Zeppelin classics.

Along with Ann and Nancy members Ben Smith, Craig Bartock, Chris Joyner and Dan Rothchild all brought their A game this evening. Don’t let the fact that the band which was formed in 1973 fool you as they pack just as much punch now as they did then. Possibly even more! The group will be on tour through the beginning of December with both standard and VIP ticket packages available. We definitely recommend you check them out if they are in your area. You won’t be disappointed.