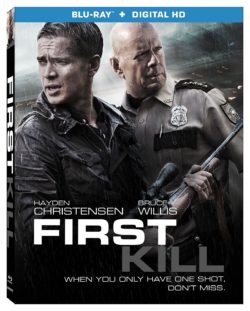 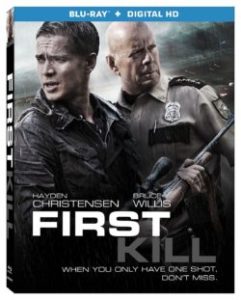 Director Steven C. Miller has blown up recently taking over the direct-to-video action film world. He has also worked with “First Kill” star Bruce Wills for the third time in the last two years after “Extraction” (2015) and “Marauders” (2016). The film has it moments and I really dig Miller’s style of directing. Willis is always good (even though he feels like he’s sleepwalking in this a bit) but I can’t get into Christiansen. I will let this fall into the low budget action flicks that are not great but also if you accept them for what they are, overall it ends up working.

Official Premise: In order to reconnect with his son, a Wall Street broker takes his family to the cabin where he grew up for a hunting trip. But the trip takes a deadly turn when they become entangled in a heist gone bad that results in the broker’s son Danny, being kidnapped, forcing his father to recover the stolen loot in exchange for Danny’s life.

Lionsgate delivers “First Kill” as a combo pack with a Blu-ray and Digital HD copy included. The film is definitely low budget but the 1080p transfer is still sharp and looks like it was shot on a much bigger scale, due to Miller’s skills. The special features include a solid Director’s Commentary track, which is worth checking out. There are also a featurette for “Behind the Scenes of First Kill” as well as Extended Cast/Crew Interviews and a few
Deleted Scenes included.