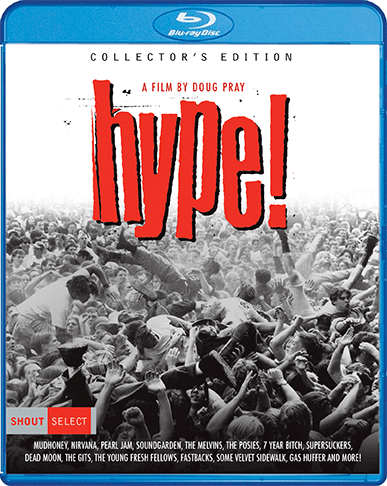 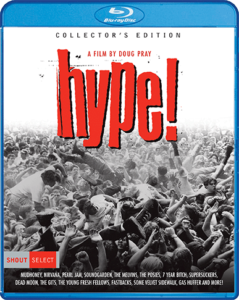 Revisit the documentary that dropped viewers into the Pacific Northwest in the early ‘90s and showcased a vibrant underground music scene which eventually exploded into the global “grunge” media frenzy. “Hype!” follows the music from local bands playing for their friends, to Sub Pop Record’s brilliant exploitation of “the Seattle Sound,” to Nirvana’s “Smells Like Teen Spirit” hitting #1 on the charts. 20 years after the films initial release “Hype!” returns for its first ever release on DVD and BluRay and included with the film are a new series of interviews, audio commentary and vintage performances which give fans of the film something extra to enjoy.

Around 20 years ago the world was first exposed the music phenomenon that would eventually be dubbed “grunge”. “Hype!” captures the story of the genres early roots and formation through a variety of interviews with bands like MonoMen, Melvins, Soundgarden and Pearl Jam along with many others who help solidify the sound of an era. The first thing that jumped out for me was how great the film looked as the audio and video look fresh while still retaining the grittiest of the original format. Where the release really shined for me was in the special features section which includes a retrospective segment titled “Hype! 20 Years After” which features new interviews with a number of the bands and people featured in the original film. There are also some cool vintage interviews and performances that really brought back memories of growing up during this time.

If you have never seen “Hype!” now is your chance as you will get to see not only the original film but a ton of extra footage which was really adds to the release. Though the film echoes the sentiments of a scene that is now far removed it serves a near perfect time piece of what things were like just prior to invention of the internet and digital media.